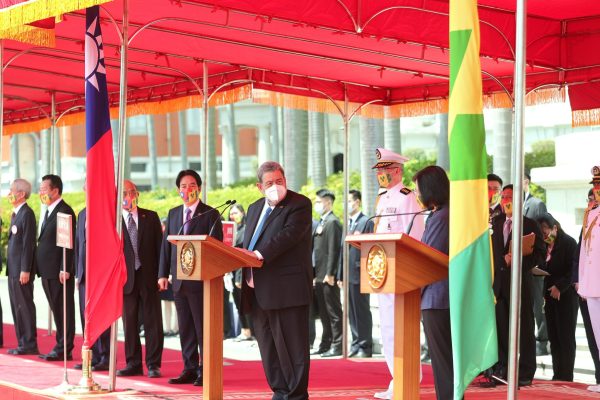 U.S. House Speaker Nancy Pelosi’s recent high profile and high-stakes visit to Taiwan, which made global headlines, prompted other politicians to take high-level visits of their own to the island.

One month ago, Prime Minister of Saint Vincent and the Grenadines Ralph Gonsalves entered the fray. With no outward signs of hesitation, beginning on August 8 as China was continuing to conduct unprecedented military drills around the island, he led a delegation on a six-day state visit to Taiwan.

At a time when cross-strait relations rested on a knife-edge, what did Kingstown hope to gain from Gonsalves’ trip to Taiwan?

First off, some basic facts about this small state serve as a useful context. Saint Vincent and the Grenadines is among the smallest of the 193 member states of the United Nations. This sovereign country, whose capital is Kingstown, has a population of just over 100,000.

A former colony of Great Britain, whose Westminster model of governance it has inherited, Saint Vincent and the Grenadines is also a Caribbean Community (CARICOM) member state.

Currently in his fifth consecutive term in office, Gonsalves holds the record as the longest continuously serving head of government in the country’s post-independence period to date.

In deciding to take the trip to Taiwan, with which Kingstown has diplomatic relations, Gonsalves appeared to be betting that such high-level diplomacy would send an impactful signal that Saint Vincent and the Grenadines stands with Taiwan. As Taipei maneuvered to defy Beijing’s saber-rattling, Gonsalves’ trip demonstrated his resolve in standing up for that island nation in its hour of need.

With this view in mind, one can also frame Gonsalves’ trip from a different angle: Taipei actively encourages and places considerable stock in such visits. The impetus for this form of diplomacy is Taipei’s determination to move the needle in favor of establishing the Republic of China’s sovereign bona fides, contemplating an uncontested place among sovereign states, on the basis of the Montevideo Convention on the Rights and Duties of States.

The impetus is also that such visits serve as tangible expressions of support by members of the international community for Taiwan, as Taipei perennially stares down what some describe as Beijing’s scaremongering in its quest to unify Taiwan with the mainland.

In the process, as Gonsalves perhaps sees it, his state visit to and continued interest in Taiwan amid its politically charged relations with China also provides a fillip to Saint Vincent and the Grenadines’ diplomatic tradition of advocating on behalf of smaller states in the international system. As was evident in this crisis moment, what is also notable about Gonsalves’ trip is that he stepped up to the plate in support of Taiwan when it mattered the most. Thus, the prime minister’s visit was a testament to the strength of Vincentian-Taiwanese relations.

With regard to Gonsalves’ August visit, then, timing was everything. Another key ingredient was the personal involvement of the prime minister in laying the ground for the trip, although little is known about the day-to-day, behind the scenes political and diplomatic preparations for the visit.

During Gonsalves’ visit to Taiwan, authorities deepened ties through new agreements. This was the highlight of his visit, which no doubt provides a boost to the new phase in Vincentian-Taiwanese relations.

As Beijing attempts to assert dominance over large swathes of the South China Sea and the Pacific Ocean, Taipei will be the subject of even more pressure from Beijing – and even more in need of backers like Kingstown. For the latter, the rewards could potentially increase several-fold.

Gonsalves’ trip to Taiwan in August was his twelfth, which suggests that island nation is a Vincentian foreign policy priority. In Kingstown’s internationalist thinking, maximizing its diplomatic sway is significantly linked to Saint Vincent and the Grenadines’ commitments in such hot-button issues of the highest order in international politics. With this in mind, it matters not only how Kingstown positions itself diplomatically, but how Saint Vincent and the Grenadines is viewed because of its position by others in the international community.

The prime minister’s visit received the plaudits of Taipei and the smaller jurisdictions that diplomatically align themselves with Taiwan, all of whom have determined such diplomacy is fit for purpose, serving to raise to prominence small(er) states who are in the crosshairs of large countries’ foreign policy gambits.

In this sense, as the Vincentian leader waded into fraught cross-strait relations in aid of Taiwan at an especially combustible moment, his diplomatic action was not just about amplifying collective push-back regarding China’s aspirations in that part of the world.

Russia’s February 24, 2022, invasion of Ukraine has raised concerns among CARICOM member states, not least because it could potentially open the door for other hegemons to act with reckless abandon in their purported spheres of influence.

There is little question that Gonsalves’ visit to Taiwan is an outgrowth of this thinking, with parallels to be drawn to Beijing’s hostility toward and threat to Taipei.

In a letter addressed to Russian President Vladimir Putin earlier this year, Gonsalves emphasized that his country is “deeply disturbed” with the Kremlin’s so-called “special military operation” in Ukraine, calling for an end to the same.

At the same time, Gonsalves’ visit helped to shore up Taiwan’s diplomatic defensive line, not least because it added a respected Caribbean voice to protestations over China’s unprecedented display of hard power targeting Taiwan in recent weeks.

It also seems to confirm that in striving to give effect to the country’s foreign policy objectives under the Gonsalves administration, Kingstown has gained a larger share of the international diplomatic spotlight. The recent visit came on the coattails of Saint Vincent and the Grenadines’ two-year term as a non-permanent member of the U.N. Security Council (UNSC).

In 2019, after a highly competitive selection process, Saint Vincent and the Grenadines copped a much sought after non-permanent seat on the UNSC. The eastern Caribbean state held that seat from 2020 to 2021, the smallest nation ever to do so.

For small states like Saint Vincent and the Grenadines – as I argue in a recently-published scholarly contribution, summarized previously – a non-permanent seat on the UNSC represents an opportunity to enhance their international status. It is a feather in Kingstown’s diplomatic cap, which also includes Gonsalves’ prominent and long-standing backing of leftist Latin American leaders and associated initiatives geared toward the wider Latin America and the Caribbean region.

All too often, small states tend not to receive the recognition they are due for their foreign policy hand in consequential international diplomatic moments, where the focus tends to be on global and/or regional players. Fundamentally, Saint Vincent and the Grenadines’ diplomatic efforts vis-à-vis the latest Taiwan Strait flare-up are an important example and reminder of how small states can effectively rise to the occasion in high-stakes diplomatic episodes of global significance and of significance to their national interests.

The author would like to thank Ambassador Patrick I. Gomes, Ambassador Colin Granderson, Ambassador Riyad Insanally, and Ambassador Wayne McCook for their very helpful comments on earlier drafts of this article.