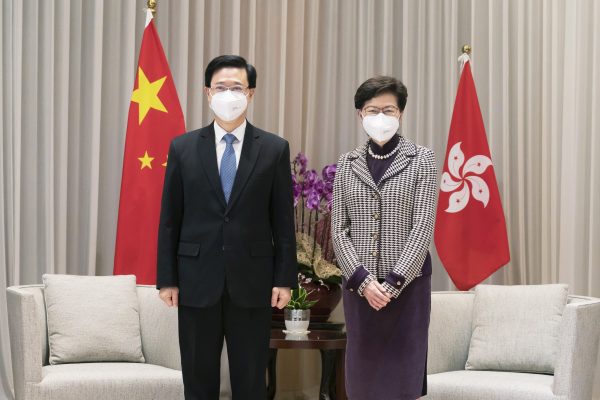 Hong Kong Chief Executive-elect John Lee, left, and Chief Executive Carrie Lam pose for a photo during a meeting at the Central Government Complex ahead of a news conference in Hong Kong, Monday, May 9, 2022.

Hong Kong leader Carrie Lam said Monday that Chinese patriots are now firmly in charge of the city following the election of its new leader, who ran unopposed in a process controlled by Beijing.

The protests led to the imposition by Beijing of a sweeping National Security Law and the reorganization of the city’s legislature. Political opponents were subsequently jailed, dissenting voices silenced, and the organized opposition quashed.

Appearing with Lee, Lam said such changes were necessary to restore order and stability in the Asian financial hub.

“I want to thank the central government again for taking resolute measures when Hong Kong faced unprecedented challenges,” said Lam, who is stepping down after a single five-year term as leader.

“It formulated the National Security Law, which helped Hong Kong transform from chaos to order, and also improved Hong Kong’s electoral system so that we can achieve long-term peace and stability,” Lam said.

Lee won more than 99 percent of the vote cast by the 1,500 members of the election committee.

While China cited the need to restore order as the motivation for political change in Hong Kong, the demand that only patriots — defined as those loyal to the ruling Communist Party — could hold office was a central theme.

The establishment of the political system of “patriots running Hong Kong” is vital for Hong Kong’s future, Lam said.

The foreign ministers of the Group of Seven industrialized countries — Canada, France, Germany, Italy, Japan, the U.K., and the U.S. — called the selection process “part of a continued assault on political pluralism and fundamental freedoms.”

“The current nomination process and resulting appointment … further erode the ability of Hong Kongers to be legitimately represented. We are deeply concerned about this steady erosion of political and civil rights and Hong Kong’s autonomy,” they said in a joint statement.

Lee will replace Lam on July 1 and take over a city that has in the past five years been through the tumultuous days of the 2019 pro-democracy protests, the ensuing crackdown and a recent coronavirus outbreak that overwhelmed Hong Kong’s health care system and prompted Beijing to send in medics and build temporary quarantine facilities.

The handover of power will incorporate the formation of a new government, the continuation of epidemic control measures, and preparations for the 25th anniversary celebration of Hong Kong’s return to Chinese rule after 156 years as a British colony.

Lee said he and Lam exchanged views on forming the new government during their Monday morning meeting, but gave no indication of any new direction for his administration.

Lee has said he wants to ensure Hong Kong’s position as a center for financial deal-making while improving quality of life for the 7.4 million citizens of one of the world’s most expensive cities. However, national security concerns are expected to trump all other issues, fueling speculation about a further deterioration of civil rights, free speech, and the rule of law.

Lam said her government would “render all the necessary assistance and support” for the handover, ensuring Lee “will lead Hong Kong to a greater height in the next five years.”

In Beijing, Foreign Ministry spokesperson Zhao Lijian fired back at criticism of the election from the European Union, whose foreign policy chief, Josep Borrell, said Lee’s selection “violates democratic principles and political pluralism in Hong Kong.” Borrell said the election furthered the dismantling of the “one country, two systems” principle under which Hong Kong was supposed to retain its own political, legal and economic system for 50 years after the end of British rule.

The election “shows that the new electoral system is a good system in line with the principle of ‘one country, two systems’ and the reality in Hong Kong, and reflects the mainstream public opinion and consensus of staying in solidarity and striving for prosperity of all walks of life in Hong Kong,” Zhao said at a daily briefing. He spoke before the G-7 statement was issued.

“It is believed that the new chief executive will lead the new (Hong Kong) government and people to create a new prospect of good governance in Hong Kong,” Zhao said.