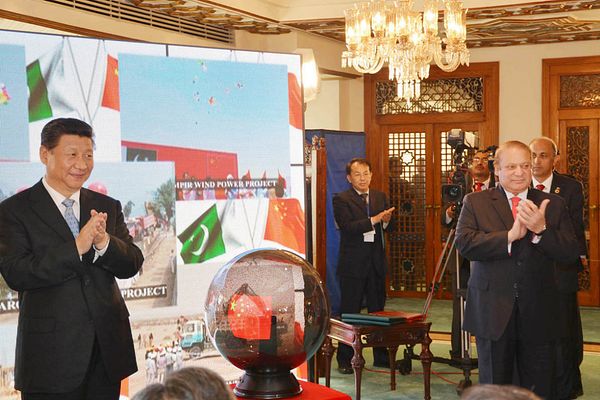 Conventional accounts frame China’s Belt and Road Initiative (BRI) through a geopolitical lens. In this context, the BRI is perceived as being formulated and implemented in a top-down process, whereby Beijing selects, finances, and constructs projects along the official economic corridors. Consequently, participant countries lack any real agency. However, evidence suggests that this framing is flawed on both accounts.

First, the BRI combines bottom-up and top-down approaches to policy formulation and implementation since its foundations can be traced to provincial level initiatives. Therefore, its geopolitical dimension is incidental to the process rather than its driving force. Second, partner countries exercise significant agency in the project selection process, indicating that Beijing does not unilaterally dictate terms. Both of these dynamics are evident in the BRI’s flagship corridor: the China-Pakistan Economic Corridor (CPEC).

While Chinese and Pakistani officials have long sought to develop a multimodal economic corridor linking the Karakoram Highway and Pakistan’s deep-water ports along the Arabian Sea, the foundations of CPEC were laid down in the 1990s. During this decade, officials in Xinjiang were implementing a double-opening strategy that sought to simultaneously link the province to China and its Eurasian neighbors. From their perspective, these linkages would promote economic development in the province, which they viewed as essential for social instability.

Nevertheless, Pakistan presented risks and opportunities. On the one hand, Chinese officials were concerned that Uyghur separatists were receiving indoctrination and training across the border; thus opening the region to greater trade flows posed security concerns. On the other hand, improved economic activity in the area was considered the most effective way to mitigate this problem. Consequently, for much of the 1990s Beijing focused on lobbying Islamabad for improving the security conditions along the border, followed by the gradual widening and deepening of cross-border trade. In essence, Xinjiang officials were pivotal in formulating a development and security strategy that incorporated key Eurasian neighbors, which ultimately influenced Beijing.

This influence hit critical mass in the early 2000s as Beijing incorporated several provincial strategies, like Xinjiang’s double-opening, into the national Great Western Development (GWD) strategy. Much like their provincial counterparts, central officials viewed the GWD strategy as a means to generate economic development in order to promote social stability along China’s underdeveloped interior and frontier regions. Pakistan took on a more prominent role during this period as China began to invest in upgrading the Karakoram Highway and Gwadar port. This resulted in greater economic linkages, which ultimately became the foundation for CPEC. In other words, CPEC was the product of improved cross-border linkages established by provincial officials in Xinjiang, which facilitated further engagement by central officials. Furthermore, the infrastructure and local knowledge developed during previous decades ensured that CPEC would have a prominent place in the BRI.

Although CPEC is part of the broader BRI, Xinjiang officials continue to exercise significant influence over how Beijing formulates and implements projects along the corridor. Local officials have sought to situate Xinjiang as a hub linking China’s interior to Eurasia. To this end, they have announced North-South and East-West internal corridors and transportation hubs in order to promote that status. Importantly, a direct link to Pakistan, with its access to the Indian Ocean, also allows Xinjiang officials to present their province as a gateway for landlocked Central Asian countries looking for more proximate maritime access.

In essence, the BRI is an agglomeration of economic corridors whose origins can be traced to provincial initiatives from the 1990s. Importantly, these provinces continue to exercise influence over how these corridors are shaped, thus illustrating a synthesis of bottom-up and top-down policy formulation and implementation.

Added to this is the reality that these corridors are also shaped by local politics in participant countries. The case of Pakistan is no different. Therefore, CPEC is shaped by not only China’s domestic political dynamics but also Pakistan’s.

For Pakistani officials, establishing an economic corridor with China has been viewed as a means for addressing the country’s underdevelopment. Much like their Chinese counterparts, they see development as a means to address social instability. This is especially prescient given the long-standing insurgency in Balochistan, where Pakistani officials see parallels with Xinjiang, and hope that a corridor will improve the economic conditions of the region and mitigate social tensions. In this context, successive Pakistani governments have sought to attract and shape Chinese investment in the country.

The Musharraf government (2001-2008) first realized the potential value of Gwadar port to Beijing as well as how China could play a part in modernizing Pakistan’s infrastructure in key sectors like railways, tourism, telecommunication, petroleum, and mining. Furthermore, Pakistani officials understood that they could influence investment decisions to curb internal pressures. In this context, the Sharif government (2013-2017) pressed China to initially focus on energy projects. Fifteen energy projects were prioritized in order to assuage the energy crisis that had inflicted harm to Pakistan’s economy and residents. However, as energy capacity increased, Pakistan developed another problem, energy-over-production, with 13,000 MW as potential waste. Thus the new challenge involved transmission and distribution of this overcapacity. Consequently, the Khan government (2018-2022) pushed for infrastructure investment to address this gap.

Pakistani officials look at CPEC in three stages to be completed around 2030. The three stages are as follows: short term (2015-2020), medium term (2021-2025), and long term (2026-2030). The initial stage involved the construction of vital roadways, rails, logistics, ports, and storage capacity. The second stage focuses on rules, regulations, laws, and standardization policies. Pakistani officials hope to position the courses as a transit hub before ratifying customs rules and regulations and finally pushing Pakistan into the corridor staging (third stage) for foreign direct investment in various sectors.

The ultimate goal is simple: create mass transit opportunities for land-locked countries regionally but start with China as the mainstay before furnishing bilateral treaties. China is building the infrastructure in its western province to export goods to global markets, and Pakistan is the easiest and fastest route. A case in point is that a trading bloc is emerging that will create a transit market for Pakistan, including Tajikistan, Kyrgyzstan, Uzbekistan, Turkmenistan, and Kazakhstan. To make this happen, Afghanistan has to become part of CPEC as well, which is currently part of high-level discussions.

The formulation and implementation of CPEC indicates that geopolitical framings of the BRI fail to account for its various stakeholders and their interests. Within China, evidence shows that provincial officials have been instrumental in establishing the foundations of what have become the core economic corridors of the BRI. Furthermore, they remain proactive by situating their provinces as key players vying for central funds and influence. For their part, central officials have sought to harmonize existing provincial initiatives into a national strategy in order to meet long-standing goals of integrating frontier spaces as well as generating sustainable development in the interior. Lastly, as the case of Pakistan illustrates, participant countries have exercised significant agency in project selection, often for the purpose of meeting their own political goals. Beijing has regularly acceded to these preferences in order to establish durable relations. Recognizing this complex dynamic is vital for understanding the variance in BRI implementation around the world as well as the role that stakeholders and their interests play in influencing this process