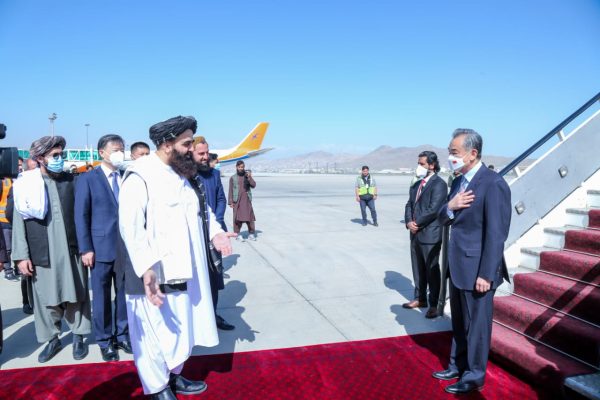 Chinese Foreign Minister Wang Yi’s trip to South Asia has been full of surprises. After a planned visit to Pakistan to attend the Organization of Islamic Cooperation conclave as a guest, Wang made an unannounced stopover in Afghanistan, before heading to another unannounced stopover in India. From there, he will make his way to Nepal.

Wang’s trip to India was unconfirmed until the last minute, but it was widely expected in the region. His visit to Kabul, by contrast, came as a surprise. China does not officially recognize the Taliban government, but the decision to have Wang meet with Taliban officials in Kabul is a clear sign that Beijing is willing to engage.

Formal recognition may not be far behind, especially as Wang emphasized that China “respects the independent choices made by the Afghan people,” “respects the religious beliefs and national customs of Afghanistan,” and “never interfered in Afghanistan’s internal affairs.”

The message sent by Wang’s visit was a return to business-as-usual, despite the Taliban takeover – and with no regard or concern for the human rights abuses the Taliban stand accused of. In fact, Wang praised the “tangible results” of the Taliban government in “actively respond[ing] to the concerns of the international community.” That message is especially ironic coming just a day after the Taliban reneged on a promise to allow girls in grade six and above to return to school.

Instead, Wang’s approach sent a strong “business-as-usual” vibe. Many of the talking points covered in the meeting – Chinese security concerns and the possibility of economic cooperation – also featured in Wang’s conversations with previous Afghan President Ashraf Ghani, who fled Kabul in the face of the Taliban’s takeover last August. In fact, the most notable difference was Wang repeatedly brought up the political “reconciliation process” in talks with Ghani, meaning peace efforts with the Taliban. By contrast, Wang made no suggestion for the Taliban to engage in reconciliation or outreach to political opponents.

Clearly Beijing considers Taliban rule of Afghanistan a done deal and is ready to get back to business as usual. Wang even made a point to denounce “the political pressure and economic sanctions on Afghanistan imposed by non-regional forces.”

The Taliban certainly got the message of Chinese support. Amir Khan Muttaqi, acting foreign minister under the Taliban regime, told Wang that “this is the most important high-level delegation received by Afghanistan” – presumably meaning since the Taliban set up their interim government. He told Wang that “Afghanistan is ready to actively participate in Belt and Road cooperation and strengthen trade and investment cooperation with China.”

Muttaqi also reassured Wang that “Afghanistan is confident of further improving its security environment, stabilizing and controlling the situation, and ensuring the security of foreign institutions and personnel in Afghanistan.” Security is China’s number one concern in Afghanistan – particularly preventing the resurrection the East Turkestan Islamic Movement, a terrorist group dedicated to Uyghur separatism. Wang was clear that China expects the Taliban to deal with the group: “China hopes that the Afghan side will earnestly fulfill its commitment and take effective measures to resolutely crack down on all terrorist forces, including the ETIM.”

For his part, Muttaqi assured Wang that “Afghanistan is highly vigilant against the resurgence of terrorism and will take resolute and effective measures to eliminate terrorist forces in Afghanistan with all-out efforts. The Afghan Taliban fully understands China’s concerns and will never allow any force to use the Afghan territory to engage in acts detrimental to Chinese friends.”

Outside observers are skeptical that the Taliban are truly cracking down on foreign fighters – many of them the Taliban’s former allies – in Afghanistan.

As for bringing the Belt and Road to Afghanistan, put China down as interested but understandably skeptical. Its previous investment projects in Afghanistan have not borne fruit and given the near-collapse of the Afghan economy it’s hard to imagine Chinese companies being keen to do more business there at the moment.

According to Wang, “China is ready to continue to provide assistance within its capacity for Afghanistan’s development and revitalization, actively carry out cooperation in such fields as medical care, poverty alleviation, agriculture, disaster prevention and mitigation, and welcomes Afghanistan’s participation in Belt and Road cooperation.” The emphasis is much more on humanitarian aid and development assistance, rather than partnership on infrastructure projects.

China will be hosting a foreign ministers’ meeting on Afghanistan, bringing together the top diplomats of Afghanistan’s neighbors, next week. Muttaqi said that “he looks forward to participating in the meeting” – which would be a big development for the Taliban’s diplomacy. Their government was not included in the previous iteration of the foreign minsters’ meeting, held in Iran in October 2021. The participants then – China, Iran, Pakistan, Russia, Tajikistan, Turkmenistan, and Uzbekistan – having varying degrees of engagement and comfort with the Taliban. India, certainly, is not likely to want to sit at the same table at the Taliban, but it was a noticeable snub at the last meeting and might not be among the invitees regardless.

Perhaps even more controversial than the Taliban’s attendance, however, was the revelation from Moscow that Russia’s foreign minister, Sergei Lavrov, will be coming. Russia’s ongoing invasion of Ukraine has earned it pariah status among much of the world. While none of the countries that attended the October 2021 meeting has condemned Russia’s invasion, they aren’t entirely comfortable with it, either. Uzbekistan, in particular, has called for an end to hostilities.

Having Lavrov included in a meeting on Afghanistan allows Moscow to fight back against narratives of diplomatic isolation – and China’s decision to send the invite also sends a clear signal of support for Russia.