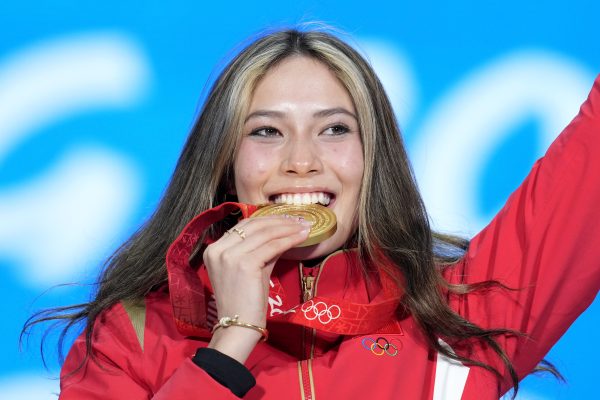 Gold medalist Eileen Gu of China celebrates during the medal ceremony for the women’s freestyle skiing big air at the 2022 Winter Olympics, Tuesday, Feb. 8, 2022, in Beijing.

Four and a half mid-air rotations on the third and final jump of the competition clinched the top spot for Gu. France’s Tess Ledeux and Switzerland’s Mathilde Gremaud won silver and bronze, respectively.

Big Air was a new sport featured at this year’s Winter Olympics. Athletes earn points from a panel of judges based on the difficulty of their airborne moves and the success of their landing after being launched down a 50-meter tall ramp on skis.

Even before her gold medal-winning performance, Gu was a darling of the Chinese media and Olympic organizers. Pictures of her adorn billboards and bus stations across the host city.

Assisted by her mother Gu Yan, she has created a marketing empire promoting a variety of major brands such as China Mobile and Anta Sportswear.

“On the final jump I decided to try a move which has not been done before by a girl,” Gu said. “Even if I didn’t stick it, I still wanted to attempt my own very best, and show the world what I’m capable of.”

Raised in San Francisco and an American citizen, Gu grew up frequently spending time in China, the country of her mother’s birth. In 2019 she revealed her decision to compete for at the Winter Games for China rather than the U.S. China won only one gold medal in the last winter Olympics in 2018, and the recruiting of top athletic talent from overseas such as Gu has been part of an official strategy to boost the nation’s medal tally.

With excellent results in freestyle skiing competitions in the past two years, Gu’s status in China has grown, as has her bankability as a brand ambassador. Following her gold medal win on Tuesday, a Chinese finance website declared, “With more than 20 corporate endorsements in hand, Eileen Gu’s annual income may exceed 200 million renminbi” ($31.4 million).

Beijing News estimated that in 2021 she would have been the third-highest-earning female athlete behind Naomi Osaka and Serena Williams.

But amidst the downward spiral of China-U.S. relations, and criticisms of China’s human rights abuses, Gu’s decision to compete for China rather than the country of her birth has been controversial.

For her part, Gu says that her focus is on promoting her sport of freestyle skiing among Chinese youth, and particularly among girls. “The opportunity to help inspire millions of young people where my mom was born during the 2022 Beijing Olympic Winter Games is a once-in-a-lifetime opportunity to help to promote the sport I love,” she wrote back in 2019.

Gu will also compete in the women’s slopestyle and halfpipe free skiing events to be held next week.