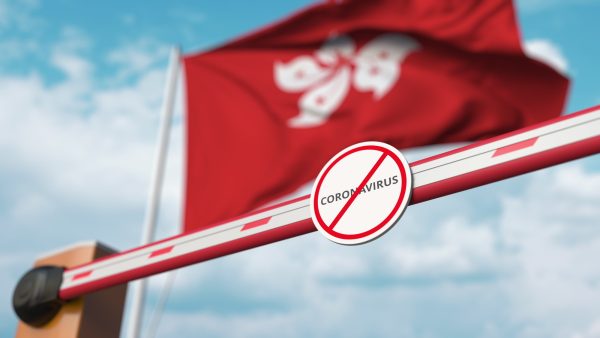 That includes limiting public gatherings to two people and private ones to members of only two households. Places of worship, hair salons, and other businesses were ordered to close.

Such measures are part of Hong Kong’s effort to align itself with mainland China’s “zero-COVID” policy, which aims to totally stamp out outbreaks, even as infection numbers continue to rise and other countries shift their approach to living with the virus.

Outside a vaccination center in the Sai Wan Ho area on Thursday, retiree Ken Wong waited in a long line to get his first shot so that he would qualify for a “vaccine pass” when it’s available.

“This is insane,” the 70-year-old said. “There is no way to reach zero cases. If we are going to achieve zero cases it would mean everyone’s wallet will become empty because a lot of people will be out of work and have no income.”

The latest measures will remain until at least February 24, when the vaccine pass will be rolled out, allowing only vaccinated people to visit places like shopping malls and supermarkets.

Newly confirmed cases fell slightly on Thursday to under 1,000 after hitting a daily record 1,161 on Wednesday, Hong Kong health authorities reported. Overall, Hong Kong has seen only about 18,500 cases of COVID-19 and 215 deaths among its population of some 7.5 million.

Opponents of the zero-COVID approach contend that with nearly 65 percent of the population fully vaccinated and signs the Omicron variant of the virus is less severe for those with some immunity, that it is time to change course.

“The government is having difficulties adopting a new strategy which will both align with mainland China but also serve the interests and adapt to the situation in Hong Kong,” said Jean-Pierre Cabestan, a professor of political science at the Hong Kong Baptist University.

“Nothing can be decided without Beijing’s green light, and the local authorities don’t want to take any chance with that.”

Hong Kong, a former British colony, was handed over to communist-ruled China in 1997. Under the “one country, two systems” principle, the territory was to retain its own political, social, and financial institutions for 50 years after being transferred from British rule.

But China has been tightening its control, stamping out political opposition and curtailing free speech. It imposed a sweeping National Security Law following anti-government protests in 2019, resulting in the imprisonment, intimidation and exile of most opposition voices.

There’s a practical reason for complying with zero-COVID policies — to facilitate travel between Hong Kong and the mainland under less stringent quarantine rules than the three weeks or more required of all foreigners arriving in the Chinese mainland.

Beijing will not let Hong Kong’s borders to the mainland be reopened unless the city reaches and maintains zero-COVID.

This week, Beijing officials and Chinese state media warned Hong Kong against any changes, saying that adopting a “living with the virus” policy would overwhelm its medical systems, the newspaper South China Morning Post reported.

In the upscale Discovery Bay neighborhood on mountainous Lantau island, home to many foreigners, all residents were ordered tested this week after authorities found traces of the virus in the sewage.

Sewage testing is a common practice in Hong Kong, but government demands for entire communities to be tested if the virus is detected are stretching the patience of residents enduring long lines at testing centers.

“The approach is obviously not working,” said Ivan Serrano, a 42-year-old from Spain who had just been tested with his son.

“We can see that other countries with different approaches — apparently the situation currently is better [there] and here, it just got worse.”