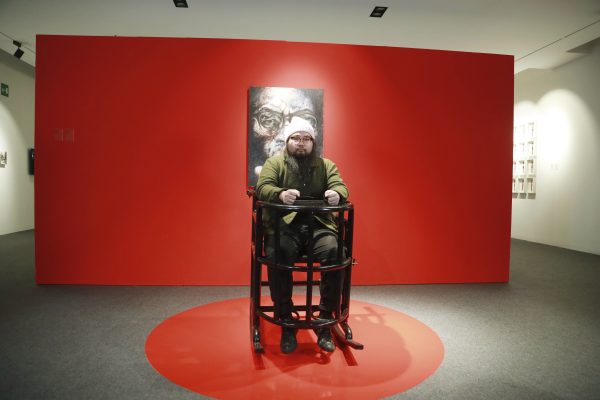 On New Year’s Eve Badiucao, a famous Chinese dissident artist, was landing in Melbourne on his way back from Italy, where the Chinese government had severely pressuerd his exhibition in Brescia. Currently, the so-called Chinese Banksy, is in self-exile in Australia.

In this interview Badiucao explains the role of his art, linked to a past of family persecutions since the Mao era. How did this former law student become a dissident artist under the wing of Ai Weiwei, through artistic projects that mix human rights awareness and new technologies? Above all, the dialogue with Badiucao is crucial to understand how China exerts its propaganda outside its borders through multiple levels: from coercion and boycotts to judicial accusations, stalking, and death threats.

How did you experience Beijing’s attempt to boycott your exhibition in Brescia?

Threats and boycott attempts are common in my performances, but I can say in Italy I enjoyed a whole menu of warnings. It all started with a letter from the Chinese government where they threatened to jeopardize future collaborations with the Brescia Museum and the city. I really appreciated the reaction of Brescia. They welcomed me, giving an example to the world and opposing Beijing.

The second attempt was online, where accounts related to the government started a hate campaign against me. There were also “soft warnings” – Chinese people who showed up during the exhibition claiming to be supporters while warning me about the dangers of staying in Italy, where “people die on the streets for no reason.” I haven’t told anyone yet, but in Brescia I was forced to change hotels every day. So I thought: Now, I could work for Yelp [the business review website].

In a recent documentary you decided to reveal your identity, explaining both your reasons and the consequences: threats to you and your family, canceled exhibitions, surveillance on your phone, home invasion, and stalking. You say the CCP awaits the moment of revenge when there is less media attention. What do you mean? How did they find out your identity? How is your family now?

I moved to Australia in 2009 and started making political cartoons in 2011.

During the Hu Jintao administration?

That’s right, I can say it was an okay period.

Yes, there was much more digital freedom. Xi on the other hand never stops providing material for satirists; he’s like Trump. However, this does not mean that the government wouldn’t want to control the internet in 2011 as well. In that period they arrested Liu Xiaobo, Nobel laureate for peace. So, social networks were simply a new, not-regulated thing [in 2011].

I applied for Australian citizenship to be more protected and free. I hid my identity for seven years but through traces left on social media and my ties with Ai Weiwei in Berlin, finally the government connected the dots and got my identity. This exposed my family in China to different risks, so I canceled my exhibition in Hong Kong and made a documentary (the director was threatened as well) to show my real face. The more I make art, the more I feel protected by public consideration.

My family is still in China, but I prefer not to contact them to avoid them being persecuted.

So they forced you not to hear from your family?

No, it was my choice.

Recently, you revealed: “I want to extend the definition of art. I consider myself an artist; being an activist is just a side effect of being an artist in China.” Why did a law student decide to become an artist? How did you meet Ai Weiwei and how did he inspire you?

I come from a family of filmmakers who were persecuted during the Maoist 100 Flowers Campaign in the 1950s. I always wanted to be an artist, but art was not well seen at home. I initially followed my family wish, which was to be a lawyer, but then I met Ai Weiwei on Twitter. Although he is very famous, he is also very helpful and easy-going. He gave me a lot of advice, until I started working with him and a magical friendship was born. Ai Weiwei is an inspiration for human rights, not only Chinese but also European ones.

Indeed, you often talk about Chinese government problems, but since you live in Australia, what idea did you have of the critical issues of Western liberal-democratic systems?

Ai does not use the internet to promote his art, he makes art with the internet itself and he spoke, for example, about the migrant tragedy in Europe. I think that if Europe and the U.S. want the world to respect human rights, they must do more at home. Because every time China is accused of not respecting them, the [Chinese government] propaganda replies, “violations still persist in the West as well.” This does not mean we should not continue to report violations around the world. Human rights issues remain universal.

However, I am also thinking of leaving Australia to see if other places – like Europe or the U.S. – are more open-minded. In Melbourne, the links between the Australian and Chinese governments often impose self-censorship or prevent me from accessing certain spaces or developing certain initiatives.

During the Tiananmen anniversary you began a campaign against Twitter, requesting the social media giant create a “tank man” emoji to remember the Tiananmen massacre. How is this initiative going? What do you mean when you say “don’t use the internet to promote art but make art with the internet”?

The “tank man emoji” is exactly one of the many ways of making art with the internet. It is also bringing the scientific community to take a stand. Creating a new emoji means working with the Unicode language, and every year the Unicode community meets to decide what can be integrated or removed. Furthermore, now I am thinking of a project with NFTs (non-fungible tokens) where the blockchain technology will prevent them from being modified or censored.

What ways do people use to circumvent Beijing’s censorship? How popular is your art in Chinese communities around the world and in rural areas of China?

There are tons of ways to avoid censorship in China, but you need knowledge about basic English and VPNs. It is not for everyone. Some Chinese think I am a CIA agent. As mentioned, propaganda and censorship also go abroad, not necessarily with intimidation and agreements, but simply through systems like WeChat. If you are an entrepreneur who wants to promote tourism in China, you must use it, and if your attitude is unwelcome, you will have problems. So, if you want to do business, you better keep politics – or even human rights – out of it. Furthermore, Chinese people can only have one citizenship and many of those living abroad want to remain Chinese and to keep contacts with their country.