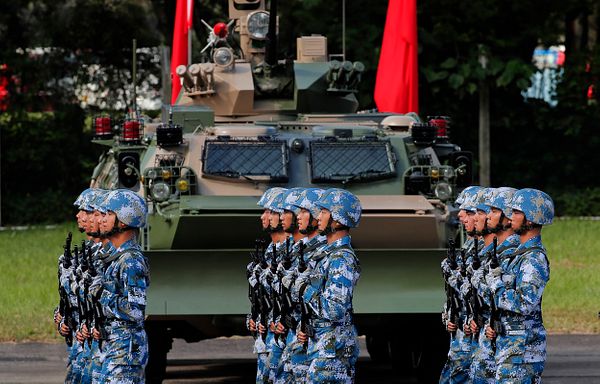 Maj. Gen. Peng Jingtang’s move to Hong Kong underlines the government’s focus on anti-terrorism in the city – something critics say is a smokescreen for cracking down on dissent.

China’s military says the former head of internal security in the Xinjiang region will lead the People’s Liberation Army’s garrison in Hong Kong, in the latest of a series of moves aimed at bringing the semiautonomous city under Beijing’s tight control.

Peng met Monday morning with Hong Kong’s Chief Executive Carrie Lam, who told him her government would work with the garrison to “jointly safeguard the sovereignty, security and development interests of the nation and help maintain the long-term prosperity and stability of Hong Kong,” according to a government news release.

The move follows China’s stamping out of political opposition and curtailing free speech in the city, a former British colony that was promised it would keep its civil liberties and independent legal system intact for 50 years following the handover to Chinese control in 1997.

China imposed a sweeping National Security Law on Hong Kong following anti-government protests in 2019, resulting in the imprisonment, intimidation, and exile of most opposition voices. Independent media outlets have been raided and forced into closure through seizure of assets or threats of prosecution.

Candidates considered insufficiently loyal to Beijing were barred from running in elections for the local Legislative Council.

From 2018, Peng commanded the paramilitary People’s Armed Police force in Xinjiang, where China has detained hundreds of thousands of Uyghurs and other members of Muslim minority groups in political reeducation camps. The vast region remains enveloped in a security blanket that controls most aspects of the lives of its Muslim residents.

The United States and others have labeled the campaign as genocide, while China says all participants in what it describes as a push for job training and de-radicalization have now graduated. Beijing insists that all its actions in Xinjiang are necessary to combat terrorism in the region. Peng, in particular, is reported to be the leader of a new special force formed in Xinjiang “for the anti-terrorism needs in the region and across China.” His appointment could signal a more heavy-handed approach to alleged terrorist activities in Hong Kong.

Bloomberg has already reported a noticeable surge in terrorism charges in Hong Kong. Reporter Kari Soo Lindberg counted 29 arrests on “terrorism-related allegations” from July 1, 2020, when the National Security Law entered effect, through mid-December 2021. All but one of the arrests occurred since June 2021.

In an October speech, Lam vowed to strengthen “the work on the prevention of terrorist activities.” Bloomberg listed some of the results of that effort:

Fliers are being stuffed into mailboxes telling residents how to spot terrorism. Posters warning passengers to “run, hide and report” violent attacks are plastered across tram cars. Counterterrorism exercises have been held at the airport and rail stations. School children were introduced to the bomb disposal units and allowed to handle replica guns at this year’s National Security Education Day.

In July 2021, following the stabbing of a police officer, Hong Kong’s second-ranked official, Chief Secretary John Lee, promised an “all-out effort to combat local terrorism.” Lee blamed the “violent riots” of 2019 – when pro-democracy protesters took to the streets in mass rallies against changes to Hong Kong’s electoral system – for “breeding homegrown terrorism.” He particularly warned about “lone-wolf terrorist attacks” by “people who are radicalized by extreme ideologies.”

Critics say that Hong Kong is also using the “terrorist” label against protesters and dissidents. In 2019, China pursued an aggressive propaganda campaign to paint the pro-democracy protests in Hong Kong as “the work of ‘terrorists’ manipulated by Western powers and ‘radical forces.’”