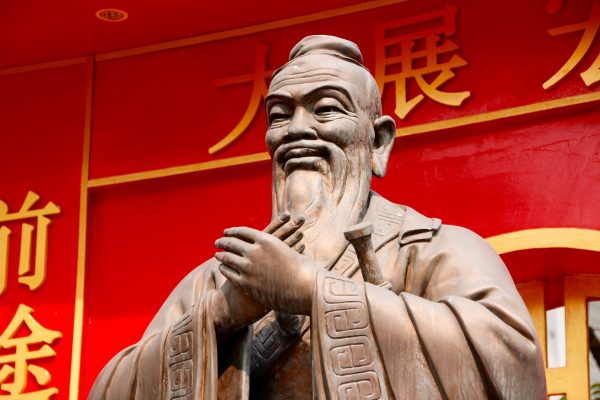 After much anticipation from China observers, the Sixth Plenum of the 19th Party Congress was held in Beijing during the second week of November. During the plenum, the CCP passed the Resolution of the Central Committee of the Communist Party of China on the Major Achievements and Historical Experience of the Party over the Past Century. One of the most significant changes in the resolution is that it elevates the importance of Chinese culture and values.

The Resolution moves beyond the conventional “socialism with Chinese characteristic as the adoption and practice of Marxism in China” rhetoric and places Chinese culture at the front and center of Chinese socialism. It praises Chinese culture as a significant advantage of the Chinese nationality and calls for its continuation and development. The Resolution further declares that the Xi Jinping Thought on Socialism with Chinese Characteristics for a New Era combines Chinese traditional cultures with Marxist principles. Thus, Xi Jinping Thought “embodies the best of the Chinese culture and ethos in our times and represents a new breakthrough in adapting Marxism to the Chinese context.”

Combining traditional Chinese culture with Marxism is not new in China. As early as 1988, Wang Huning argued that social “software,” such as values, feelings, psychology, and attitudes, can shape political destiny as much as “hardware” factors such as institutions, systems, power, and norms. Wang concluded that political cultures based on Western liberal ideals and Marxist doctrines failed to take root in China. Thus, he proposed constructing a long-lasting Chinese political culture by combining traditional Chinese culture and modern spirits. In 2011, the debate on neo-Confucianism resulted in the rise and fall of a Confucius statue in Tiananmen Square. Zheng Yongnian, a Chinese political scientist residing in Singapore, became hugely popular in China by describing the current Chinese political system as neo-Confucianism. The concept of “harmonious society,” Hu Jintao’s flagship political legacy, also derives from various Confucian concepts.

A challenge the CCP has been continuously facing since 1978 is how to transition from a revolutionary party to a governing party. The primary goal of the CCP as a revolutionary party was to mobilize the mass population and destroy the old system. However, the leaders of the CCP soon realized that revolutionary spirit could not provide incentives for economic growth and fulfill the task of constructing a socialist society. As a governing party, the CCP’s role is not to break the existing political and social order but improve it. Therefore, the party is on a continuous quest to improve its governance capability. The 19th Party Congress’ Third Plenum in 2019 passed a resolution on modernizing the governance system and improving governance capability, which elevated this transition to one of the CCP’s most vital objectives.

However, the CCP realizes that it can’t learn much from the classical Communist doctrines. Karl Marx painted a rosy picture of a communist world and appealed to the proletariat to smash their chains and overthrow the oppressive capitalist society. Vladimir Lenin provided a road map to this communist world: a top-down, hierarchical, and centralized political party of the proletariat should lead the revolution and grab political power. However, neither idea provides a comprehensive guideline on how to govern a state after the revolution. The Soviet Union was not a success story, and the CCP has indeed studied its collapse carefully. Thus, it is logical for the CCP to investigate China’s own history and study the wisdom of the Chinese imperial governance system, which lasted for over 2,000 years.

The traditional Chinese political system emphasizes a strong statist approach in providing social goods and addressing popular needs. It can serve as a base for addressing China’s governance challenge. By placing Chinese culture at the center of Chinese socialism, the CCP attempts to combine socialist principles with the traditional Chinese political system to synthesize a new foundation of political stability and effective governance.

The CCP also wants to use traditional Chinese moral values to combat the spread of liberalism and individualism, which are labeled as corrupted Western ideologies. The CCP views individualism as a danger to society. Wang Huning, today the ideological tsar of the CCP, outlined the danger of individualism as a force dividing and eroding the American society in his early book “America Against America.” In the book, Wang detailed homelessness, drug problems, and racial conflicts. Thus, he concluded that the United States was in deep trouble because of the social cleavages between Whites and minorities, rich and poor, and equality and privilege. He attributed these problems to liberalism and individualism, which commodify all things in society. As a result, Wang concluded that “commodification, in many ways, corrupts society and leads to a number of serious social problems.”

In addition, the CCP views Western liberalism as a source of political instability. The party saw the spread of Western liberalism as one of the root causes of the 1989 student protest movement. It also viewed the spread of liberalism worldwide as the reason for the collapse of the Soviet Union, the ensuing color revolutions, and the Arab Spring. Watching these events unfold and the demise of authoritarian regimes worldwide with fearful eyes, the CCP believes that the United States uses liberalism as an ideological weapon to spread chaos and bring down other regimes. China, the CCP concludes, is the next target. Thus, the infiltration of liberalism in China is viewed as an American secret operation to foster “peaceful evolution” and bring down the socialist regime.

Facing the danger of these Western ideas, the CCP wants to employ traditional Chinese culture as a shield to prevent the intrusion of liberalism and individualism. Appealing to traditional conservative values has been a common practice to combat the influence of Western ideas worldwide. In Russia, Putin upholds traditional Russian Orthodox values, such as opposing homosexuality and supporting the traditional family structure. By portraying himself as the defender of traditional Russian values, Putin rejects Western liberalism as “degradation and primitivism” that leads to “a moral crisis in the West.” The Supreme Ruler of Iran also appeals to traditional Islamic culture to combat Western ideas, which are seen as a source of social corruption that endangers the Islamic Revolution.

Confucianism strictly regulates the relationship between the state and individuals and among individuals themselves through the Three Fundamental Bonds between ruler and subject, parent and offspring, and husband and wife. The Three Fundamental Bonds underline the importance of upholding social hierarchy and protecting authoritarian rule. Confucianism also set up model behaviors through the Five Constant Virtues: benevolence (ren 仁), righteousness (yi 义), propriety (li 礼), wisdom (zhi 智), and trustworthiness (xin 信). Thus, Confucianism establishes boundaries for individual behaviors; all individuals are expected to fulfill their roles in society.  People who fail to meet these social duties are labeled as outliers and subjected to tremendous social pressure. The pressure to fit in creates a strong collectivist value, which can serve as a natural barrier to individualism.

However, the emphasis on traditional Chinese culture will exacerbate the fundamental problem of the Chinese political system. Joseph Fewsmith identifies a primary challenge to the Chinese government: the tension between CCP’s unitary political leadership and the increasingly diversifying society in China. Economic development causes the rise of different interests in different social groups, which leads to a pluralized society. However, traditional Chinese culture does not address this problem. Rather than accommodating diversity, it enhances a unitary system of moral values and forces everyone to conform to it. Thus, it reduces political inclusiveness and decreases the government’s ability to meet rising popular demands. Promoting and even forcing a single moral belief will inevitably alienate a significant portion of society.

Furthermore, the rise of individualism and liberalism is a natural result of economic growth. Increasing socioeconomic development, including higher incomes, more education, urbanization, and a shift toward white-collar jobs, led to a worldwide increase of individualism since 1960. Solely blaming Western infiltration indeed misunderstands this global trend. Individualism and liberalism can also serve as important sources of creative destruction, which leads to intensive growth. Suppressing and stigmatizing them might stifle innovation and economic development.