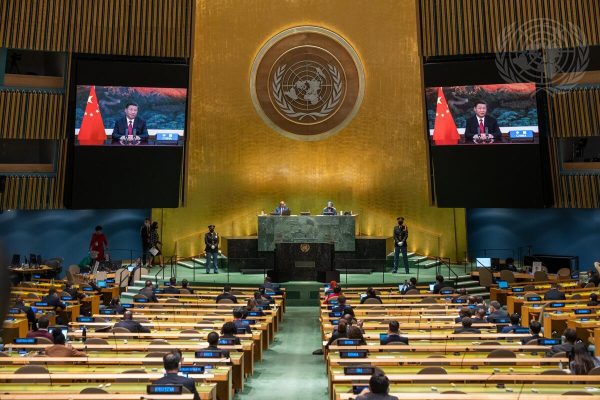 Choosing calm language as tensions with the United States grow, Chinese leader Xi Jinping reiterated his nation’s longtime policy of multilateralism on Tuesday, telling world leaders at the United Nations that disputes among countries “need to be handled through dialogue and cooperation.”

His remarks came hours after U.S. President Joe Biden said he didn’t have any intention of starting a “new Cold War” — itself a response to criticism from the U.N. chief this weekend that both Washington and Beijing need to make sure their differences and tensions don’t derail their 42-year-old relationship and cause problems for the rest of the planet.

“One country’s success does not have to mean another country’s failure,” Xi said in a pre-recorded speech to the U.N. General Assembly’s leaders’ meeting in New York. “The world is big enough to accommodate common development and progress of all countries.”

The comments from leaders of the two major powers, the world’s most formidable economies, appeared to represent linguistic, if not necessarily substantive, efforts to calm the waters after U.N. Secretary-General Antonio Guterres admonished them over the weekend for putting confrontation over productive dialogue.

China often preaches multilateralism and international cooperation in public forums, though critics say its policies toward Taiwan and in South China Sea territorial disputes with its neighbors — among other things — strongly indicate otherwise.

Xi didn’t let the United States off the hook entirely, however, and rarely does. In pointed comments clearly aimed at Washington, he criticized nations that would fiddle around in the affairs of others.

“Recent developments in the global situation show once again that military intervention from the outside and so-called democratic transformation entail nothing but harm,” he said, an apparent reference to events in Afghanistan last month after the U.S. military withdrawal.

China’s Foreign Ministry and state media have relentlessly emphasized the chaos surrounding the withdrawal of U.S. and NATO forces, saying Washington would be responsible for any ensuing instability in the region. Afghanistan shares a small border with China.

The very presence of a Xi speech at the United Nations on Tuesday was unexpected. Earlier schedules of speakers indicated a deputy Chinese premier would give an address Friday. The decision to slot in the country’s supreme leader moved him up to Tuesday’s first-day docket, hours after Biden’s remarks.

Earlier Tuesday, Biden said in his U.N. address that the United States was not attempting to be divisive or confrontational.

“We are not seeking a new Cold War or a world divided into rigid blocs,” he said. “The United States is ready to work with any nation that steps up and pursues peaceful resolution to shared challenges even if we have intense disagreements in other areas.”

He didn’t say the word “China” directly in the speech. But the language mirrored what Guterres said this weekend in an Associated Press interview when he said he worried of a new Cold War — this one between Washington and Beijing if they failed to improve their relationship.

“Unfortunately, today we only have confrontation,” Guterres said Saturday in the AP interview. “We need to re-establish a functional relationship between the two powers,” he said.

He reiterated that theme Tuesday in opening the meetings, saying: “I fear our world is creeping towards two different sets of economic, trade, financial, and technology rules, two divergent approaches in the development of artificial intelligence — and ultimately two different military and geopolitical strategies.”

“This is a recipe for trouble,” Guterres said.

China’s current Communist rulers took power in 1949 under Mao Zedong, ejecting Chiang Kai-shek’s Nationalists — American allies — from the mainland to the island of Taiwan. It took until 1979 for diplomatic relations between Beijing and Washington to be established.

Ties over the ensuing decades have pinballed between friendly and contentious. Low points have included the years after the government’s bloody 1989 crackdown on democracy protesters in Tiananmen Square and the days after a U.S. military aircraft was forced down off the southern Chinese coast by fighter jets in 2001.

Today, the two governments share an assortment of disagreements, from trade and tariffs to climate change, human rights, and online security. In particular, China’s claims of total sovereignty over the South China Sea do not sit well with the United States and its allies. China protests the presence of the U.S. military in the area and has upped its threat to attack the self-governing island democracy of Taiwan, which it claims as its own territory.

China has also been strongly critical of American calls for a renewed investigation into the origins of COVID-19, which first spread in the central Chinese city of Wuhan in late 2019. Blaming the pandemic on a “Chinese virus,” which former U.S. President Donald Trump and his supporters often did, does not go over well in China.

“China will continue to support and engage in global, science-based origins tracing, and stands firmly opposed to political maneuvering in whatever form,” Xi said in his speech.

On climate, China has tied its cooperation on reducing carbon emissions to the United States dropping critical policies linked to the mass detention of Uyghurs and other members of Muslim minority groups in the northwestern region of Xinjiang, a crackdown on civil rights in Hong Kong and other human rights issues.

Xi, the paramount leader in China’s Communist Party for a decade, has set the tone for an assertive foreign policy, backed by his nation’s massive economic influence and growing military power.

Zhao Kejian, a professor of international relations at Beijing’s Tsinghua University, said there were opportunities for cooperation on pandemic control, security on the Korean Peninsula, Afghanistan, Iraq and other areas, even while disputes would continue over ideology, values, and human rights.

“There might have already been preparations on that between the two sides,” Zhao said. “China believes the U.N. embodies multilateralism. If the U.S. also pays attention to the U.N., there can be a foundation for strategic coordination under the framework of the U.N.”