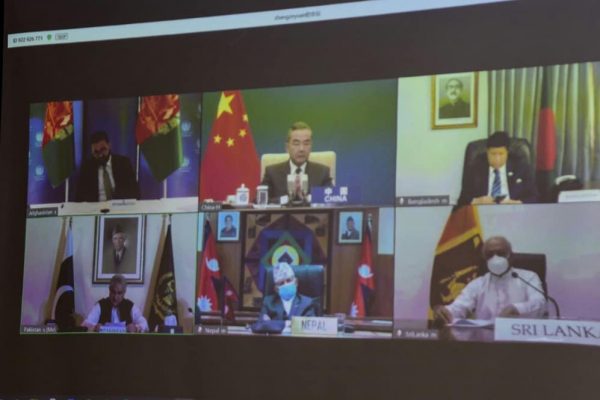 China has managed to chaperone its South Asian neighbors by launching the China-South Asia Emergency Supplies Reserve and Poverty Alleviation and Cooperative Development Center, the results of a virtual meeting convened by Chinese Foreign Minister Wang Yi and attended by the foreign ministers of Afghanistan, Bangladesh, Nepal, Pakistan, and Sri Lanka (excluding India, Bhutan, and the Maldives) on April 27. The assistant foreign minister of China and the ambassadors of the above-mentioned South Asian countries got together in Chengdu on July 9 to set up these platforms, which aim to work for COVID-19 vaccination and poverty alleviation in South Asian states.

The emergency reserve aims to devise a common strategy for combating the COVID-19 pandemic through vaccine development and distribution. It also aims to create an emergency reserve to combat contingencies caused by climate change. The Poverty Alleviation and Cooperative Development Center aims to pool strength and integrate resources to assist South Asian countries’ economic development, livelihood improvement, and poverty reduction. Such issues require long-term partnership, indicating that China intends to engage with South Asia for the long haul.

Even though strategically significant to South Asia, these initiatives went almost unnoticed by the mainstream media and think tanks of the region.

China’s interest in the South Asian region is not new. South Asia is of vital strategic importance for China for many reasons, especially in current times.

First, geographically, South Asia lies between East Asia and the oil-rich Middle East. Also, China’s trade and economy is dependent primarily on the Malacca Strait and sea lanes of communication passing through the Indian Ocean; ergo, China must increase its presence in the Indian Ocean region, which hitherto has been dominated by India.

Second, many South Asian countries (Afghanistan, Bangladesh, the Maldives, Nepal, Pakistan, and Sri Lanka) have become party to China’s Belt and Road Initiatives (BRI) with an expectation that it would provide an impetus to their developing economic environments. China wants to continuously woo and engage with these countries to maintain its newly generated strategic space. This is even more pertinent as the BRI is under academic and media scrutiny in these countries. Thus, when India suspended its COVID-19 vaccine exports, including to its neighbors, citing its domestic needs, China used the opportunity to project itself as a benevolent neighbor and provided lifesaving vaccines to these countries. This bolstered a conducive regional environment for cooperation between South Asian countries and China. Strategically, this has enabled China to accelerate its soft power and political influence, projecting itself as a responsible great power and countering Indian’s political and economic preponderance in the region.

Third, since the violent border skirmish in the Galwan Valley and the diplomatic row over India’s targeting of Chinese business interests in India, China-India political relations have further degenerated in 2021. Realizing the urgency of the situation, India went ahead to form a stronger alliance with the U.S.-led Quad (Australia, India, Japan, and the U.S.), which C. Raja Mohan argues is important for India’s strategic autonomy. India’s support to the U.S.-led Indo-Pacific Strategy and its regular military exercise with the U.S. Navy indicates that India is tilting toward the United States, which it believes would help to check Chinese assertive military power.

As India opts for external balancing and thus moves its attention away from its immediate neighborhood, China wants to seize this opportunity to strengthen its relations with South Asian countries and counter India’s dominant position in the region by creating an alternative regional bloc. The Observer Research Foundation, a prominent New Delhi-based think tank, even dubbed such increasing Chinese engagement as a sign of a “Quad with Chinese characteristics.”

The new partnerships that have been formed between some South Asian countries and China could possibly compete with the already existing regional cooperation mechanisms in South Asia.

China became an observer state in the South Asian Association for Regional Cooperation (SAARC) in 2005, and since then, it has been pushing to be a full member of the regional organization. China has also contributed $300,000 to the SAARC Development Fund. However, India’s long and continuous objection to Chinese membership in the South Asian regional forum has prevented China from becoming a full member. While India is obstructing China’s membership in SAARC on the one hand, New Delhi itself is reluctant to lead the SAARC process forward on the other, resulting in SAARC falling victim to what Ernst Haas described as “turbulent non-growth.”

The SAARC summit, which was supposed to happen in every two years, has not been held since 2014, primarily because of India’s opposition to convening the summit in Pakistan. India has been accusing Pakistan of cross-border terrorism and spared no effort to diplomatically isolate the latter, accusing Islamabad of posing a serious obstacle to regional peace and stability. The SAARC process has been in a frozen state from continuous hindrances, mostly because of the antagonistic bilateral relations between India and Pakistan.

As the SAARC process is in limbo, India’s neighbors have become open to other avenues for regional interactions and cooperation. This has created a fertile ground for the seeds of Chinese collaboration and influence in the South Asian region.

Other than SAARC, the Bay of Bengal Initiative for Multi-sectoral Technical and Economic Cooperation (BIMSTEC) is another regional organization which since its inception in 1997 aspires to provide a platform for sectoral development cooperation for its member countries (Bangladesh, Bhutan, India, Myanmar, Nepal, Sri Lanka, and Thailand). Even though it was created as an “alternative” to the failing SAARC, BIMSTEC too has not made any significant mark in promoting regionalism in South Asia.

There is a probability that the China-led “minus-India” initiative would undermine the existing regional process in South Asia. At a time when the SAARC and BIMSTEC processes are suffering an uncertain future, these regional organizations might see China’s new platforms as direct competition to their regional integration agenda.

Such a scenario could intensify geopolitical and economic competition between India’s traditional power and China’s new, accelerating power in the region. Greater Sino-Pakistan interaction via regional cooperation would make it diplomatically challenging for India to maintain its influence in the region. It also could embolden Pakistan’s confidence and voice over regional economic and political issues, which could be a strategic blow to India’s effort to isolate Pakistan diplomatically.

The project also carries a symbolic meaning. It seems China wanted to kill two birds with a single stone. First, it is a message to India about its position against China’s membership to SAARC and also an exhibition of China’s power to form a parallel organization in India’s immediate neighborhood. Through this initiation, China successfully showcased that South Asia is no longer India’s sphere of influence.

Second, it is a demonstrative message from China to the Western powers that it still enjoys confidence from many South Asian countries and is capable of consolidating its position by creating new regional grouping with like-minded countries. The launch of this China-led initiative is an answer to the critics of its BRI project, illustrating that China still has an amiable allure when it comes to cooperation on economic development. Through this initiative, China is also looking to counter the West’s attempt to isolate it at the global level in post-pandemic times.

This changing geopolitical scenario should push India forward to revive the process under existing regional organizations likes SAARC and BIMSTEC to protect its interests and the overall prosperity of the region. Western powers, especially G-7 countries, should also expedite the mechanisms to provide economic assistance as declared at the recently concluded G-7 summit.