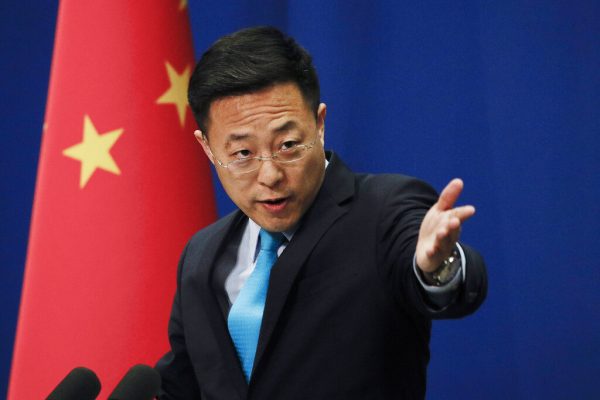 Chinese Foreign Ministry new spokesman Zhao Lijian gestures as he speaks during a daily briefing at the Ministry of Foreign Affairs office in Beijing, Monday, Feb. 24, 2020.

On Friday, World Health Organization Director-General Tedros Adhanom Ghebreyesus asked China to be more cooperative with the second phase of the WHO’s investigation into the origins of the SARS-CoV-2 virus, which causes COVID-19.

The WHO is “asking actually China to be transparent, open and cooperate, especially on the information, raw data that we asked for at the early days of the pandemic,” Tedros said.

On Monday, a Chinese Foreign Ministry spokesperson said bluntly that the “work plan on the second phase origins study proposed by the WHO Secretariat is at odds with the position of China and many other countries on the issue,” seeming to rule out any more transparency from the Chinese government.

Instead, Zhao Lijiang re-emphasized China’s preference for the next steps of the investigation to focus on “further research around earlier cases globally and further understanding the role of cold chains and frozen foods in the transmission of the virus.”

The novel coronavirus that causes COVID-19 was first reported in Wuhan, China, in late 2019. But since the virus sparked a global pandemic, China has been trying to suggest that while SARS-CoV-2 may have been identified in Wuhan, it originated somewhere else. The former can be spun as a triumph of China’s medical science; the latter is a mark of embarrassment that China is keen to avoid.

Chinese scientists and officials raised the hypothesis that the virus was brought into China from abroad, perhaps on frozen food packaging. That possibility was reflected in the joint report issued by China and a WHO work team after their visit to China in January. The report devoted an entire section to the “potential for SARS-CoV-2 introduction via cold/ food chain products” and called for further research into the theory. But those recommendations notably did not reappear in the WHO’s updated plan.

The original report’s finding that a lab leak was “extremely unlikely” has also been dropped. The WHO’s proposed plan for a second stage of the investigation listed “audits of relevant laboratories and research institutions operating in the area of the initial human cases identified in December 2019” – meaning Wuhan – as one of its five priorities.

Responding to the mention of laboratory audits, Zhao sidestepped the question by demanding the United States open its labs up for investigation. He pointed to a public letter, published by the Chinese-language edition of Global Times, that calls for a “thorough investigation” into the U.S. Army biolab at Fort Detrick. Zhao said that “over 750,000 Chinese netizens have signed the letter, calling for a thorough probe into Fort Detrick lab to find the truth of coronavirus. The number of co-signers is soaring as we speak.”

Chinese officials, including Zhao, had previously speculated that Fort Detrick may have been the true source of COVID-19, with infected U.S. soldiers then carrying the virus to Wuhan during the 2019 World Military Games. Since last spring, Chinese officials have consistently referred to any requests for China to provide more information about its own laboratory research with their own demands for U.S. labs to be thoroughly investigated.

“Why can’t origins study be conducted in the U.S. just as in China?” Zhao added.

Speaking at a webinar on the COVID-19 origins question hosted by The Diplomat last week, experts agreed it was extremely unlikely that the virus originated anywhere except for Wuhan, given the rapid pace of infections. That said, Dr. Gigi Gronvall, a senior scholar at the Johns Hopkins Center for Health Security, suggested that the United States could set a positive example by agreeing to allow international access to its own labs. That would, in effect, call China’s bluff and remove one of the excuses Beijing uses to avoid releasing more information.

In his press conference on Monday, Zhao made it clear that China wants the WHO investigation to move on to other countries. “Origin-tracing is a scientific matter, the second phase of which requires study in multiple places around the world by scientists,” he said.

The WHO, however, does not seem to agree that the origins of COVID-19 might be found outside of China. The proposed plan for the next step in the investigation also called for “studies prioritizing geographic areas with the earliest indication of circulation of Sars CoV-2.”

China’s stance, however, is that it has provided enough cooperation already, and that it is time for the WHO to look elsewhere for COVID-19’s origins. Given that it is vanishingly unlikely the virus originated anywhere except for Wuhan, where it first overwhelmed hospitals, China’s recalcitrance makes it very unlikely we will ever know the truth about the virus.