At 100, Chinese Communist Party in Renewed Drive for Legitimacy – The Diplomat

At 100, Chinese Communist Party in Renewed Drive for Legitimacy – The Diplomat 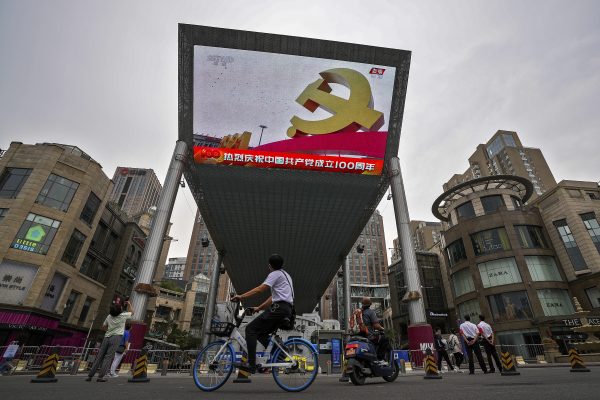 The Chinese Communist Party (CCP) is riding high on a narrative of complete triumph as it marked its centenary on July 1 with pomp, pageantry, and propaganda.

Internal discourse is brimming with commentary about the perseverance of the CCP, which has defied expectations of decay, democratization, and even demise in its 100-year journey.

Even a recent manned space mission has been swept up in the patriotic extravaganza, with one astronaut saying the mission had “added a heroic chapter to the 100-year history of the struggle of the Party.”

Despite its resilience, the party’s overarching focus remains survival and it is incredibly sensitive to any perceived erosion of public trust.

Therefore, legitimacy for its rule must be constantly reinforced and the CCP has seized upon the anniversary to bolster its appeal through a blend of narratives that incorporate past glories, present successes, and future greatness.

While it is hard to gauge their resonance among ordinary Chinese, the CCP has shown remarkable agility to finetune its messaging to suit the public mood.

The media apparatus, academics, party members, and even foreigners have all been mobilized to make the case for the CCP’s continued monopoly on power in China.

So, how is China telling the story of the century-old CCP?

People, Performance and the Past

The thrust of the messaging is that the CCP derives its mandate to rule China from “serving the people,” and that it has their unwavering support.

“Serving the people” has been the unofficial motto of the CCP since it was used by Mao Zedong in 1944, but appears to have had a resurgence under President Xi Jinping.

In his speeches and directives, Xi repeatedly underscores the need for the CCP to stay true to its “original mission” to serve ordinary people and not just the privileged elite.

Propaganda must be strengthened to show that the CCP “really strives for the happiness of the Chinese people,” he said recently.

State media and officials cite a study by Harvard University showing Chinese citizens’ increasing satisfaction with their government as a justification for the CCP’s rule.

“The CCP does not have any magic, but they know the changes that people desire, and they implement policies that meet people’s needs,” Vice Foreign Minister Xie Feng told foreign envoys on June 14.

“The relationship between the party and the people is as inseparable as fish and water,” he added.

Within this depiction of the CCP as “people-oriented,” a sub-theme focuses on the “special bond“ between the party and China’s youth – a historically influential section of society with which the party has had a complicated past.

Yet this theme fails to grapple with the resentment that many young Chinese feel over a perceived lack of upward social mobility – as expressed in the “lie-flat” campaign – and growing income inequality.

The party’s persuasion efforts also encompass drawing on its revolutionary heritage to inspire people and shore up faith in continued Communist rule.

Lofty portrayals of the party’s past sacrifices and glory have become omnipresent in the state media, across billboards, films, TV series, and in official speeches.

The push to harness history is also reflected in the embrace of “red tourism” or travel to historical sites, party museums and revolutionary memorials.

In February, Xi launched a campaign for the study of party history, telling cadres at all levels to find “wisdom” in the CCP’s past.

In the latest issue of Quishi, the party’s official journal, Xi again argued that history is the “most convincing textbook of the party’s unswerving struggle,” and that understanding it leads to a love of the CCP and the nation.

Wang Huning, Xi’s ideological czar, said that a recently-opened museum will help “guide party members, officials and the public to have a profound understanding of why the CCP is so capable, why Marxism works, and why socialism with Chinese characteristics excels.”

However, the focus on history does not entail a thorough introspection on the party’s checkered past, instead presenting a sanitized version of its 100-year journey.

Xi has repeatedly warned against “historical nihilism” – which means anything that challenges the official prescribed account of history.

In May alone, the authorities deleted around 2 million online posts for “distorting” party history, and also set up a telephone hotline for the public to report cases of “historical nihilism.”

Another key pillar of eliciting domestic support has been “performance legitimacy,” which means the right to rule must be judged on the ability to deliver results.

The party has long relied on its ability to provide strong economic growth and social stability in exchange for a sense of public validation.

Zhang Weiwei, a prominent Chinese scholar who recently addressed China’s Politburo on the topic of messaging, called it the “Mandate of Heaven” – an ancient Chinese concept under which emperors’ right to rule depended on how well they governed.

In another article, he proposed a “new style of narrative” that moves beyond the paradigm of “democracy vs authoritarianism” to one that focuses on “good governance or bad.”

The two examples doing the heavy lifting in sustaining the CCP’s reputation of competence are China’s “victory” over extreme poverty and its handling of COVID-19 – as highlighted in two recent lengthy “Manifesto” op-eds in People’s Daily, the party paper.

The task of lauding the CCP’s performance is also delegated to foreign voices such as a former Japanese prime minister, a Ghanaian party leader, and a Russian scholar, to name a few.

By contrast, a persuasive narrative is being pushed domestically that amplifies the supposedly dysfunctional nature of democracies, pointing to botched responses to the COVID-19 pandemic in the United States and India.

The durability of “performance legitimacy” is, however, contingent on matching people’s ever-rising expectations – and China’s aging population, structural slowdown, lack of reforms, and environmental factors will surely test it.

Perhaps to pre-empt such challenges, the message has been tweaked to focus less on growth targets and more on “all-round” development and a “better life” for citizens.

The CCP is also keen to publicize its ability to overcome crises and adapt to changing circumstances, or what it likes to call “self-reform.”

The messaging goes that unlike parties in a democracy, which are guided by short-term political benefits, the CCP can embrace a long-term vision and carry out course correction, which is labelled its “most distinctive character.”

In this narrative, however, any missteps – such as early on during the COVID-19 pandemic – are blamed on local officials and not on the central authorities.

“China’s system can avoid the multiparty weakness of vicious competition,” Chinese official Xu Yousheng said during the release of a white paper extolling the merits of the country’s political system.

The party is able “to face up to its mistakes, correct them, and bravely embrace self-reform, no matter how painful it is… the CCP is not another Communist Party of the Soviet Union,” as Xie Feng asserted.

The Soviet collapse has been a key learning experience for the CCP, and in particular Xi Jinping, who has spoken of the need to avoid a similar fate.

When Xi took over as general secretary in 2012, the party was arguably in dire straits, riddled with factionalism, inefficiency, and corruption. Xi has sought to “purify” the CCP with extensive intra-party reform, discipline campaigns, collective study meetings, and self-criticism sessions.

The most-talked about “self-reform” is the anti-corruption campaign – extremely popular with the Chinese public – which gets ample coverage in domestic media.

Despite its self-claimed superior political model, party insiders such as Cai Xia, a former professor at the Central Party School in Beijing, have called the CCP a “political zombie” with “big problems.”

The party is seeking to mold national pride in its favor, hoping that growing patriotism will distill into greater loyalty for the CCP.

In this narrative, the party’s rule is intrinsic to “the great rejuvenation of the Chinese nation” – a target Xi has pledged to achieve by 2049 – giving citizens a collective sense of purpose.

The message is clear: The party is restoring China to its rightful place in the world, and undoing its “century of humiliation,” or China’s misery at the hands of foreign powers. Without the CCP, the country would descend into chaos, only to be exploited by the West.

“Without the firm leadership of the CCP, the Chinese nation will have no future, and China will be suppressed and bullied by the US and its allies for a long time and even thus be dismembered,” a recent editorial in the state newspaper Global Times said.

To stoke nationalistic fervor, Xi and his lieutenants also talk repeatedly about China moving to the “global center-stage.” Other ideas they invoke are that “the East is rising and West is declining,” that “the ascendancy of China and fall of the U.S.” are underway, and that “hostile foreign forces” are trying to contain China.

The Chinese people “will never allow any foreign force to bully, oppress, or subjugate us,” as Xi said in his speech to mark the centenary.

Any foreign criticism of a specific policy – such as Xinjiang or Hong Kong – is dubbed as an assault on all Chinese.

“We are fighters who stand in front of the motherland and fight for her, and we want to stand in the way of mad dogs that attack China,” the Chinese ambassador to France, Lu Shaye, said recently.

The rousing rhetoric may placate domestic audiences, but it constrains China’s foreign policy options and generates negative perceptions of the country’s rise internationally.

Nonetheless, state media do not appear too worried about the public atmosphere turning increasingly jingoistic.

“While it [the CCP] started its first century as an obscure, sparse and loosely coordinated communist movement in early 20th-century China, it begins its next one as a global trailblazer ruling a potential superpower-in-waiting,” as a recent article put it.

© BBC. A previous version of this piece was published at BBC Monitoring. It is republished by permission.