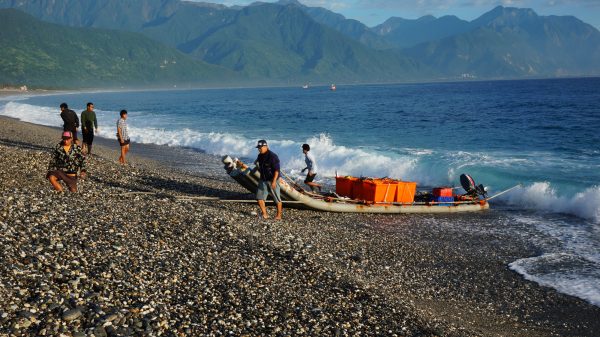 Taiwan’s government has long resisted calls to address systemic labor abuse on its fishing boats, but it is now facing pressure from within.

Taiwan’s lucrative seafood industry is back under the gun after the country’s top government watchdog demanded corrective measures to prevent forced labor aboard fishing boats.

The Control Yuan, Taiwan’s official government ombudsman body, has issued a series of demands to three government entities due to their failure to address systemic work abuse against the predominantly Southeast Asian fishermen working on Taiwanese vessels.

The United States Department of Labor last year listed fish caught by Taiwanese vessels as products of forced labor, a label that could serve as a basis for government decisions to block imports from Taiwan’s $1.3 billion seafood industry.

Wang Yu-ling, a member of the Control Yuan, said earlier this month that the Ministry of Foreign Affairs, the Ministry of Labor, and the Fisheries Agency had done nothing to address the issue, despite knowing the environmental organization Greenpeace planned to share findings from its own research with the U.S. government.

Fellow Control Yuan member Tsai Chung-yi warned that a failure to address forced labor could lead Taiwan to be blocked from exporting seafood to the U.S. and Europe in the future.

The Control Yuan demanded that the Fisheries Agency assign more inspectors to cases of alleged forced labor and called for more cross-agency communication – both longtime demands of NGOs and other advocates that have always faced resistance from the Taiwanese government.

Last week, the Control Yuan released further demands calling for the Ministry of Labor to improve its management of migrant fishermen working on coastal fishing vessels. Control Yuan member Wang Mei-yu said the ministry had failed to act after a labor broker was charged with human trafficking last year.

The Control Yuan said the ministry had received 1,521 complaints from migrant fishermen working in coastal fishing between 2017 and 2019, with 110 aimed at a single third-party brokerage agency. But the ministry did not increase its inspections of labor brokers despite the increase in complaints.

According to Taiwanese law, government agencies must reply in writing to demands made by the Control Yuan within two months. Agencies must also immediately take action in response to the demands.

Migrant fishermen in Taiwan, most of whom come from Indonesia, the Philippines, and Vietnam, work either on distant water fishing vessels that stay at sea for months on end or on coastal boats that regularly come back to shore. Only coastal fishermen are overseen by the labor ministry, as distant water fishermen are not considered to be working in Taiwan and do not receive residence documentation.

Wang Mei-yu of the Control Yuan accused the labor ministry of having little regard for the rights of migrant fishermen – an allegation regularly levied by workers’ rights advocates and the survivors of labor abuse aboard Taiwanese fishing vessels.

Taiwan’s treatment of its over 700,000 Southeast Asian migrant workers has long been a black mark on its own narrative of freedom and democratic successes. Past U.S. reports have regularly noted that the island’s labor brokers collect exorbitant fees from workers they are then expected to pay back, placing workers in “debt bondage.”

Despite this, the government of President Tsai Ing-wen has steadfastly refused to consider proposals to follow in the footsteps of South Korea and abolish Taiwan’s brokerage system.

Taiwan has also been criticized for its treatment of migrant workers during the coronavirus pandemic, an issue that is once again receiving attention as the island confronts its first major wave of locally transmitted COVID-19 infections.

Taiwan has refused to allow undocumented people to receive COVID-19 tests without being required to show paperwork, even after an undocumented Indonesian worker became one of the island’s early positive cases last February.

Taipei Mayor Ko Wen-je said last week undocumented migrants in Taipei could receive COVID-19 tests without penalties. He did not, however, guarantee that undocumented people would not face potential deportation after getting tested.