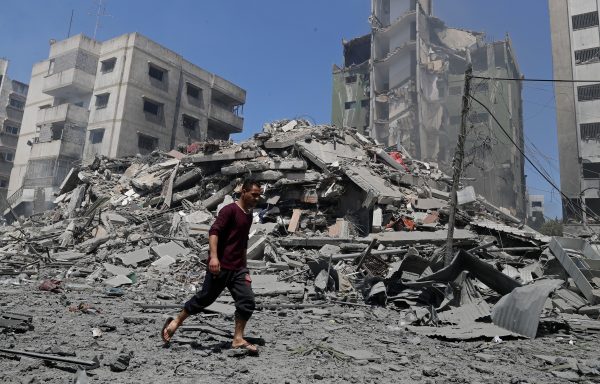 A man walks past the the rubble of the Yazegi residential building that was destroyed by an Israeli airstrike, in Gaza City, Sunday, May 16, 2021.

China on Monday renewed calls for the United States to play a constructive role in ending the conflict in Gaza and stop blocking efforts at the United Nations to demand an end to the bloodshed.

Foreign Ministry spokesperson Zhao Lijian said China, as rotating head of the Security Council, has urged a ceasefire and the provision of humanitarian assistance, among other proposals, but that obstruction by “one country” has prevented the council from speaking with one voice.

“We call on the United States to assume its due responsibility and take an impartial position to support the council and play its due role in cooling down the situation and rebuilding trust for a political solution,” Zhao said at a daily briefing.

At an emergency high-level meeting of the Security Council on Sunday, China’s Foreign Minister Wang Yi called on the United States to join the 14 other council members and support a statement urging a halt to the violence and reaffirming support for a two-state solution to the decades old Israeli-Palestinian conflict.

Wang, who chaired the virtual meeting, said the “dangerous and urgent” situation calls for an immediate ceasefire.

“The international community must take action right now and make further efforts to avert a deterioration of the situation, prevent the region from backsliding to turbulence, and protect peoples’ lives,” he said.

Foreign Ministry spokesman Zhao said Monday that China “strongly condemns” violence against civilians and calls for an end to air strikes, ground attacks, rocket fire and “other actions that aggravate the situation.”

Calls have grown for the Biden administration to take a more active stance on the Israeli-Palestinian violence. Thus far, the United States, Israel’s closest ally, has blocked efforts by China, Norway, and Tunisia to get the Security Council to issue a statement, including a call for a cessation of hostilities.

U.S. Secretary of State Antony Blinken signaled on Monday the United States still was not joining calls for an immediate ceasefire between Israel and Gaza’s Hamas rulers as fighting entered its second week, with more than 200 people dead, most of them Palestinians in Gaza.

Speaking in Copenhagen, where he is making an unrelated tour of Nordic countries this week, Blinken ticked off U.S. outreach so far to try to de-escalate hostilities in the Gaza Strip and Israel, and said he would be making more calls Monday.

“In all of these engagements we have made clear that we are prepared to lend our support and good offices to the parties should they seek a ceasefire,” Blinken said.

He said he welcomed efforts by the U.N. — where the United States has so far blocked a proposed Security Council statement on the fighting — and other nations working for a ceasefire.

“Any diplomatic initiative that advances that prospect is something that we’ll support,” he said. “And we are again willing and ready to do that. But ultimately it is up to the parties to make clear that they want to pursue a ceasefire.”

China has long portrayed itself as a strong supporter of the Palestinian cause, while building closer political, economic, and military links with Israel.

Wang told the council that “China will scale-up efforts to promote peace talks” and he reaffirmed Beijing’s invitation “to Palestinian and Israeli peace advocates to continue their dialogue in China.”

He welcomed “representatives of the two sides to come to China for direct negotiations.”