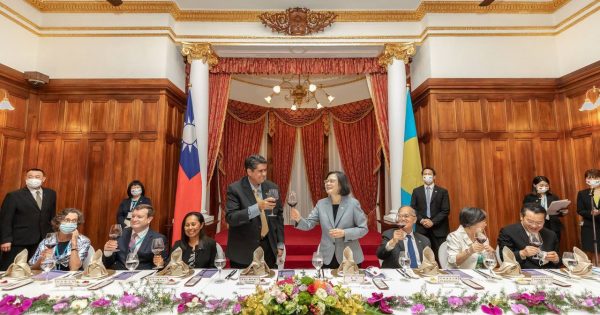 U.S. Ambassador to Palau John Hennesey-Niland became the first sitting envoy to travel to Taiwan in an official capacity since Washington cut formal ties with Taipei in favor of Beijing in 1979. Hennessey was accompanying a delegation from the Pacific Island nation of Palau, including Palauan President Surangel Whipps Jr.

The visit coincides with the opening of a “travel bubble” between Taiwan and Palau, intended to promote safe travel with fewer COVID-related restrictions and create a boon for pandemic-hit tourism. Moreover, the presence of a U.S. official on this trip also provided an opportunity for Palau and the United States to display their solidarity with Taiwan amid ongoing diplomatic, economic, and military squeezing by the People’s Republic of China. Moreover, it also marked the first visit by a foreign leader to Taiwan since the global spread of the coronavirus.

Hennessey-Niland, who became U.S. ambassador to Palau in March 2020, expressed his support for the Taiwan Allies International Protection and Enhancement Initiative (TAIPEI) Act, which was signed into force in April last year. The TAIPEI Act calls for the U.S. executive branch to strengthen trade and economic ties with Taiwan, help sustain Taiwan’s official diplomatic ties and support other partnerships, as well as maintain the island’s international space.

Palau is one of Taiwan’s 15 remaining official diplomatic partners, and one of four in the Pacific Island region (along with the Marshall Islands, Nauru, and Tuvalu). Whipps, who was sworn into office in January, told Taiwan’s Central News Agency (CNA) last month ahead of the visit that he had rebuffed overtures from Beijing last year to switch Palau’s diplomatic recognition. The Solomon Islands and Kiribati both broke ties with Taiwan in favor of China in 2019.

“I believe that we should be free to choose who our friends are,” Whipps said. “We value the relationship that we have with Taiwan and nobody should tell us that relationship should be severed,” he added. Whipps defeated incumbent Vice President and Minister of Justice Raynold Oilouch who had campaigned on switching ties to Beijing.

The new travel corridor’s first flight is set to take off on Thursday, with Whipps traveling to Palau with a group of 110 Taiwanese tourists. The initiative plans to have 16 flights a week on the route, with a goal of bringing the number of Taiwanese visitors to Palau to 100,000 annually.

The opening of the travel bubble may offer Palau an economic lifeline, as its tourism sector accounts for more than 50 percent of its gross domestic product. The small Pacific Island’s tourism industry also suffered a setback several years ago when Beijing reportedly imposed a ban of sorts on Chinese tour groups to Palau. According to Palau’s Bureau of Immigration and the South Pacific Tourism Organization, the number of Chinese tourists had grown to 87,000 in 2015, up from around 630 in 2008. State-run Chinese tour agencies are allowed to offer group package tours to countries that the government has given Approved Destination Status. Although Palau has never been granted this status, tours continued to operate until late 2017 when officials sent a memo to travel agencies reminding them that group tours to places not on the approved list were illegal; the memo mentioned Palau by name.

China has a successful record of courting away Taiwan’s diplomatic partners. Since 2013, eight countries have switched their recognition to Beijing. Against the backdrop of mounting pressure, the United States has stepped up efforts and initiatives to boost interactions with Taiwan, while still in an informal realm. A report in the Financial Times in late March also suggests that Washington plans to loosen restrictions on contacts with Taipei, a move that would make it easier for diplomats to meet with Taiwanese officials and counterparts. Outgoing U.S. Secretary of State Mike Pompeo had declared as much less than two weeks before he left office; it now appears the Biden administration will continue down the same path.

As expected, the official line from Beijing emphasized the one-China principle as the foundation of ties between Beijing and Washington, adding that the Taiwan question is the most sensitive issue in the bilateral relations. In light of the U.S. ambassador to Palau’s visit to Taiwan, Chinese Foreign Ministry Spokesperson Zhao Lijian offered a more pointed rebuke: “It must stop any official interaction with Taiwan, refrain from sending any wrong signals to Taiwan independent forces, stop any attempt to cross the bottom line, and properly handle Taiwan-related issues with prudence, lest it should damage China-U.S. relations as well as peace and stability across the Taiwan Strait.” Still, it seems clear that the Biden administration is set on a course to reinforce and elevate its partnerships in part to stymie moves by Beijing that it perceives as coercive.