Would People in Mainland China and Hong Kong Choose Democracy If They Could? – The Diplomat

Would People in Mainland China and Hong Kong Choose Democracy If They Could? – The Diplomat 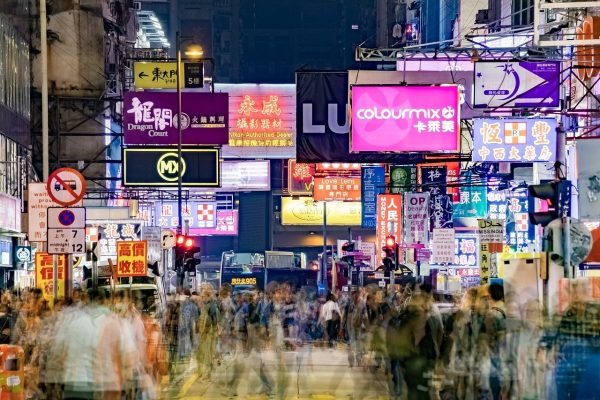 The COVID-19 pandemic has shaken the world. But whether it has equally shaken people’s confidence in democracy is an open question. Even prior to the pandemic, discussions about the worldwide “democratic recession” had been underway. Many people feel that the expected good governance and the closely related decent material life may not be guaranteed by democracy anymore, as argued by Francis Fukuyama. Different countries’ responses to the pandemic and their vast divergence in “COVID resilience” only complicate the puzzle by showing that strong state capacities­­­ – states’ “abilities to plan and execute policies” and mobilize national resources to cope with giant crises – can be independent of whether a regime is democratic or not.

So, to what extent do people living in non-democracies still fancy living a democracy during, and potentially after, the pandemic?

To answer this question, we conducted two rounds of surveys in mainland China and Hong Kong. The former is leading the “resurgence of authoritarianism” and ranks high in “COVID resilience” in the world, and the latter is China’s special administrative region with a Western-oriented ideology. Our surveys took place between April and June 2020, with 1,027 and 292 responses collected respectively from mainland China and Hong Kong. We inquire how people weigh political systems and state capacity in the context of the COVID-19: a democratic system or a strong state capacity, which bears a better premium? We find that Hong Kong respondents value government with a strong state capacity and democracy the most, whereas mainland respondents show preference to states with strong capacities and are indifferent to democracy.

“If I Could Choose”:  Survey Design

In the survey, respondents were randomly given one of four hypothetical countries and asked about their perceptions of the government in the hypothetical scenario. Figure 1 illustrates the four scenarios, each representing a distinct combination of a political system, i.e., a democracy or not, and a weak or strong state capacity shown in the pandemic.

As shown in Figure 2, mainland Chinese respondents overall show a high level of political trust in the governments with high state capacities (scenarios A and D) and a low level of political trust, or even distrust, in governments with low state capacities (scenarios B and C). (Note: Political trust is measured by the average score of the three questions, on a scale of 1 to 7, where 1 = Strongly Distrust, 2 = Distrust, 3 = Somewhat Distrust, 4 = Neither Trust nor Distrust, 5 = Somewhat Trust, 6 = Trust, 7 = Strongly Trust.) 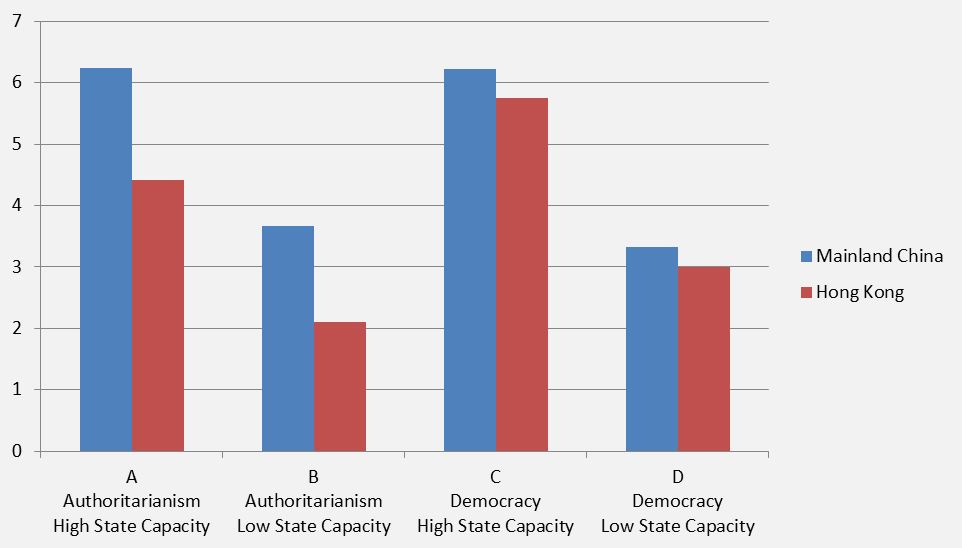 Also important, mainland respondents show an insignificant difference in political trust between groups A and C, and similarly, between groups B and D, indicating no significant preference toward democracy or authoritarianism, given the same level of state capacity. This suggests that mainland respondents’ regime preferences are only polarized along the axis of state capacity.

In contrast, the political trust of the Hong Kong respondents presents a more hierarchical order among the four scenarios. On the top of the list is democratic government with a high state capacity (scenario C). Strong but undemocratic government (scenario A) comes in the second place, scoring 4.41 out of 7, which demonstrates “neither trust nor distrust.” Weak states, whether democratic or not, received little approval. This suggests that respondents in Hong Kong care about both state capacity and democracy.

Regression analysis with more rigorous controls indicates a consistent dimensional difference between the mainland sample and Hong Kong sample. Respondents in Hong Kong significantly favor democracy plus strong state capacity while the mainland respondents are indifferent to regime type and only care about state capacity. It’s worth noticing that we found no significant difference on the regime type preference across different age and education groups in the mainland sample, which challenges the previous finding that the younger generation and the better educated support democracy more in China.

Our survey also investigated people’s voting-by-feet prospect and their regime choice in a non-crisis context, as mentioned previously. The results in general confirm the dimensional difference between mainland and Hong Kong respondents; though the strong preference for state capacity decreased by a small scale in a non-crisis context in both samples.

The chart below illustrates the effects of democracy and strong state capacity on people’s political trust separately to directly show how respondents’ regime preferences vary along the two dimensions. Dots in different shapes are political trust measured by the three questions, respectively, after taking into consideration a series of respondents’ personal characteristics such as gender, age, education, income, etc. The line going through the dots show the 95 percent confidence interval. Basically, the farther away the dots are from the red vertical line, which indicates “0” or no effect, the stronger the effect of democracy or strong state capacity on people’s regime preference. 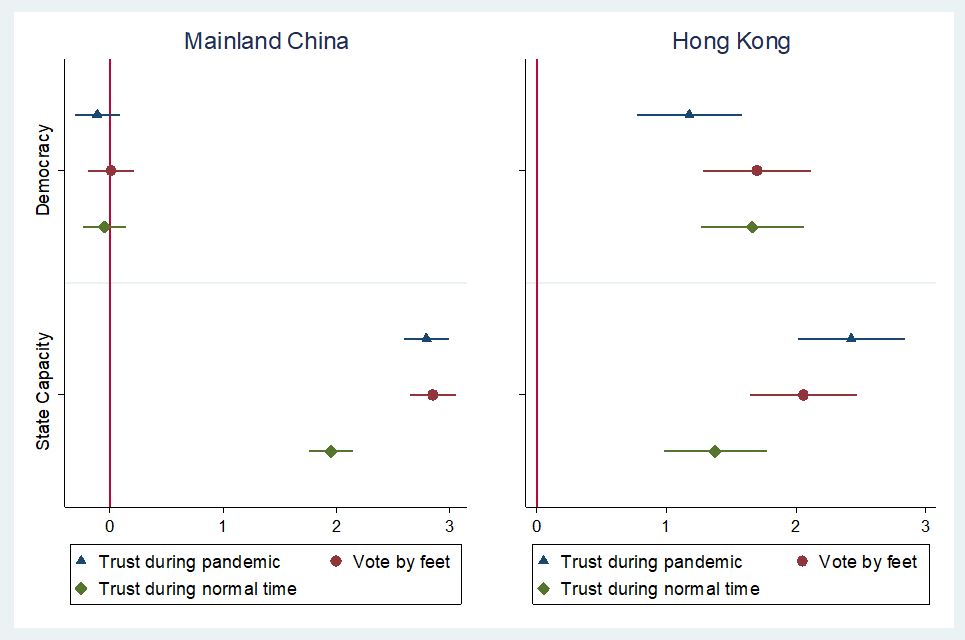 Why are there overlapping but distinct regime preferences between respondents of mainland China and Hong Kong? The explanation can be drawn from the combined influences of cultural norms and values, the performance-based legitimacy of the Chinese government, and media effects. To start with, it is unsurprising that respondents from mainland China and Hong Kong together show strong demands for state capacity. Citizens, be they liberal-democratic or authoritarian minded, not only endorse their political system for its principles but also for its performance. Understandably, government competency to address the most urgent problems facing society and to safeguard the basic quality of material life probably has been endowed with extra importance given the recent global experience of a pandemic. In Confucian societies like mainland China and Hong Kong, traditional political values emphasizing the guardianship role of the rulers may create an additional level of demand for state capacity, while at the same time more obedience to authority when solidarity is called for. Thus, the surveyed societies show a higher demand for state capacity and are more willing to pay for it if there is a cost.

Mainland China respondents have a one-dimensional evaluative standard for regimes, probably due to the influence of the Chinese government’s long-term emphasis on performance-based legitimacy. Such legitimacy is largely grounded in the state’s capacity and willingness to mobilize resources proactively toward predetermined goals – whether that means boosting economic development or swiftly responding to external challenges such as natural disasters. This strategy turns out to be especially effective at winning people’s hearts in the context of crises.

Such an effort to secure regime support works in tandem with propaganda and publicity campaigns to shape public opinion by downplaying democracy in its liberal terms. Positive narratives about domestic achievement under the Chinese Communist Party’s leadership and the moral accountability of the system lead people to believe that they are concretely enjoying a great extent of democracy. The concept of democracy is blurred, and formal democratic procedures are always left unaddressed. During the pandemic, the official media have bolstered regime support by highlighting the high responsiveness of the government and critiqued Western democracies by reporting their ineffectiveness against the pandemic.

By contrast, in Hong Kong, which is governed by a laissez-faire system and where liberal media prevail, respondents show clear value judgments between democratic and authoritarian regimes in addition to the basic requirement of state capacity. Liberal values are reinforced by liberal media. Over time, the predominance of Western-oriented media has enabled democratic and liberal values to take root in Hong Kong, as reflected in the 2014 Umbrella Movement and the 2019 Anti-Extradition Bill Movement. Thus, generally, respondents in Hong Kong appear to hold fast to the idea of democracy, while mainland respondents show indifference to democratic ideology.

These findings could help us understand the clashes between Beijing and Hong Kong, even the West in general, by revealing some fundamental discrepancies in political values from the two sides. They vindicate extant findings of Chinese citizens’ indifference to Western democracy and show that state capacity can overshadow people’s desire for political liberty, which risks single-dimensionally affecting Chinese mainlanders’ regime preferences. But the broader question is: will the world be further segmented in the post-pandemic era? People are apart living not only within physical travel bubbles, but also their respective realm of political ideals.