Latin America Believed in Chinese Vaccines. Now It May Have Reason to Rethink. – The Diplomat 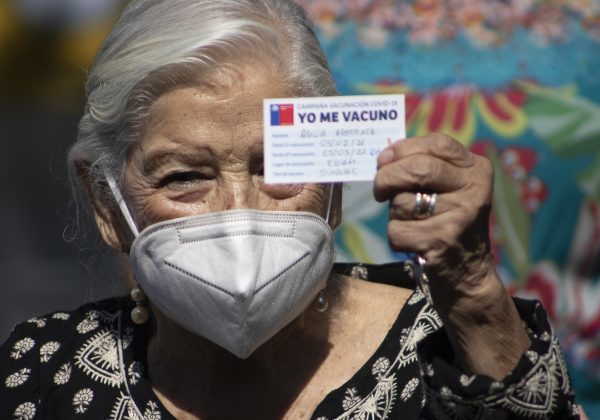 Alicia Martinez holds up her vaccination card after she was injected with a second dose of China’s Sinovac COVID-19 vaccine in the outdoor patio of a home for the elderly in Santiago, Chile, Friday, March 5, 2021.

After months of touting their COVID-19 vaccines’ accessibility and reliability, last week Chinese officials made a key concession. In a recent press conference, China’s top disease control official disclosed that his country’s vaccines suffered from low efficacy. The comment, though retracted immediately, placed foreign governments that ordered Chinese vaccines in a delicate predicament. Torn between waiting for delayed North American vaccines or accepting immediate Chinese assistance, many Global South countries agreed to the latter. Millions of dollars and one press conference later, they learned that promised public health results may not materialize.

In the coming months, the political costs of China’s botched vaccine diplomacy may be most salient in Latin America, a top beneficiary of Chinese pandemic aid.

If public outrage emerges in response to Chinese vaccines’ low efficacy, Latin American political elites could end up between two extremes: with reconfigured coalitions or deepened fault lines. Politics in Peru, Brazil, and Chile exemplify the range of possible outcomes. Yet despite regional political woes in the short term, in the long term the Chinese vaccine stumble may confer unforeseen benefits on Latin America. Misplaced trust in foreign assistance may spur more investment in domestic biomedical research, already seen in Brazil and Cuba, as a form of national security enhancement and critical infrastructure maintenance.

Across Latin America, three types of Chinese vaccines are in use: CanSino, Sinovac, and Sinopharm. Of these, Sinopharm is the most widely distributed. In recent data parsing each country’s total vaccine order by vaccine source, Brazil, Chile, and Peru ranked as the top regional recipients of all three Chinese vaccines combined. Between Peru’s possible political reconfiguration, Brazil’s likely deepened political entrenchment, and Chile’s openness to either outcome, they illustrate the diversity of potential ripple effects following last week’s news.

In Peru, news of Chinese vaccines’ low efficacy comes after two interconnected pandemic-related scandals. First, Sinopharm is under investigation by the Peruvian public prosecutor and comptroller’s offices for possible bribery to secure a vaccine contract with the Peruvian government through free vaccine samples. In the second scandal, those vaccine samples were distributed to senior officials ahead of medical priority groups. Sinopharm was selected to supply a large portion of Peru’s vaccine doses after the free samples arrived, which sacrificed an agreement with Pfizer that the government paused. Meanwhile, the country’s presidential election pits two candidates accused of authoritarian tendencies against each other. Both may increasingly suggest fringe policy ideas to disavow similarities to previous political parties, disassociate themselves from the disastrous vaccine rollout, and promise a fresh start.

In contrast to Peru’s predicted political reconfiguration, Brazil may experience entrenched political fault lines in light of Chinese vaccine news. After initially hoping for U.S. assistance, Brazil received shipments of Chinese vaccines. The Chinese vaccine acquisition process was spearheaded by the state of São Paulo without national approval, creating state-federal tension. The governor of São Paulo, considering a run for president in 2022, is likely trying to build his political profile by supporting Chinese vaccines while the president downplays the urgency of purchasing vaccines. Given that the 2022 candidate field can already be divided into pro- and anti-China factions, low vaccine efficacy will only deepen the anti-China faction’s convictions. Meanwhile, the pro-China faction may frame low vaccine efficacy as an unforeseeable risk when making time-sensitive public health decisions.

Chilean politics, with underlying discontent but no recent scandals, could swing either toward reconfiguration or entrenchment. Holding the highest vaccination rate in Latin America, Chile has recently introduced public health messaging suggesting that the worst of the pandemic is over. If a large part of the population has been vaccinated with less effective Chinese vaccines, then last week’s news will dent the government’s “excessively confident” narrative and may cause a societal backlash. A new crisis of confidence in government would build on previous allegations of vaccine queue-jumping and compound societal tension since 2019, when a metro fare raise prompted nationwide protests that were met with police brutality. This combination of factors could equally portend Chile’s political reconfiguration or its deepened political fault lines.

Although in the short run, Chinese vaccine news may harden or destabilize Latin American politics, regional countries may be able to construct long-run benefits from the Chinese vaccine disappointment. Countries with existing biomedical research infrastructure could use this impetus to strengthen their institutions and protect their funding. Reliable domestic manufacturers would ensure continuity in public health planning and provide political insulation in future crises. Despite ongoing economic troubles, two regional countries already implementing this strategy are Brazil and Cuba.

While purchasing foreign supplies, Brazil simultaneously pioneered a domestically produced COVID-19 vaccine. The resulting Butanvac, slated to enter into use by the end of 2021, is funded by São Paulo state in partnership with a biological research institute. Subject to widespread national interest, Butanvac even inspired a funk-style music video that logged 12 million views in three months. Brazilian policymakers are currently exploring options to export their vaccine to other Global South countries. In Cuba, the Soberana 2 and Abdala vaccines are both in Phase 3 of clinical trials, with a possible mass rollout in summer 2021. Cuba’s rapid domestic COVID-19 vaccine development is rooted in a long tradition of technical independence and quality biomedical research. Like Brazil, the island is also contemplating vaccine exports to Latin America and beyond.

Latin America is a region that famously eludes predictions. Yet mapping possible responses to Chinese vaccine news shows how countries’ relationships with China wobble between collaboration and overreliance. If a single spoiled vaccine source could decisively reconfigure or cement political coalitions, then countries should preemptively seek political and public health stability through domestic biomedical research and development. At a time of economic difficulties across Latin America, strategically allocating scarce financial resources toward public health should be a top priority. Fortunately, regional governments have time and another chance to remedy the situation – we all get, after all, two shots.