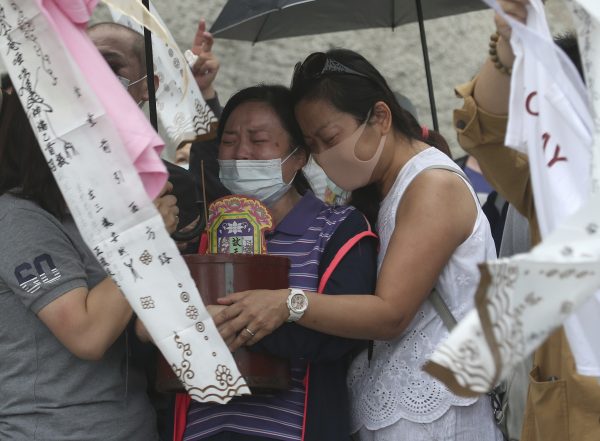 Authorities are investigating after a crane truck slid and fell in front of a passenger train, leading to a crash that killed 50 people.

The families of the victims in a train crash try to conjure their spirits near Taroko Gorge in Hualien, Taiwan on Saturday, April 3, 2021.

Tearful apologies, promises of reform, political bickering, and an overwhelming sense of grief have marked the days following an April 2 train crash, Taiwan’s deadliest in decades.

Authorities continue to investigate after a passenger train collided with a crane truck and was derailed at the entrance of a tunnel north of Hualien. The crash killed 50 people and injured 202, according to Taiwan’s Central Emergency Operation Center (CEOC).

The train was carrying 498 people on the first day of the country’s annual Tomb Sweeping Festival, during which many Taiwanese travel home to see relatives or visit tourist destinations.

The crane truck had been parked atop an incline before sliding down and falling onto the track less than two minutes before the accident, according to the independent Taiwan Transportation Safety Board (TTSB). Investigators are attempting to determine whether the crane’s brake was engaged and functional.

Young Hong-tsu, chairman of the TTSB, said the train’s driver likely had “only about seven seconds” to respond after spotting the fallen crane truck. The driver of the train was among those who died in the crash.

The driver of the truck, Lee Yi-hsiang, apologized on April 4, saying he was “deeply remorseful” and would “cooperate with the investigation by police and prosecutors to take appropriate responsibility.”

Lee was arrested after the crash and was initially granted bail on April 3 before it was revoked by Hualien District Court, which argued he was a flight risk or could destroy evidence.

Taiwan’s state-run Central News Agency reported yesterday that Lee had tried to extract his truck from roadside bushes before it slid down the incline, although it has not been determined whether this caused the truck to fall onto the track.

Taiwan’s transportation minister, Lin Chia-lung, tendered his resignation to take responsibility for the crash, but it has so far not been approved.

Taiwan’s opposition party, the Kuomintang (KMT), on April 5 called for Lin, along with Premier Su Tseng-chang, to resign over the deadly crash, blaming alleged negligence by the ruling Democratic Progressive Party (DPP) for the accident.

In 2018, 18 people were killed and nearly 300 were injured after a train derailed in Yilan County. After that incident, President Tsai Ing-wen and her cabinet established a committee to review the safety measures of the Taiwan Railways Administration (TRA), but the KMT alleges this committee was wound down after Su replaced previous Premier William Lai in January 2019.

The Taiwan People’s Party (TPP), a centrist opposition party founded by Taipei Mayor Ko Wen-je, called for the transport ministry to submit a train safety improvement plan within the next month and to vet TRA contractors for past safety violations.

Tsai on Wednesday vowed to prioritize the reform of the TRA, calling the task the government’s “unshirkable responsibility.”