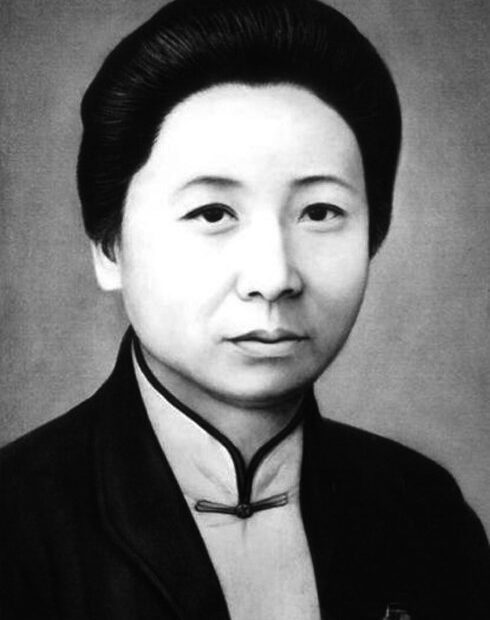 The next morning Tang and her comrades again tried to enter the parliament to monitor the debate, but this time they were met outside by guards who refused them entry. Windows were broken and some guards were injured as the crowd clamored, but failed, to get inside.

Again on March 21, the protesters returned, and this time got inside the building, but were blocked from the parliament hall. Instead, they found Sun Yat-sen (孙中山 Sūn Zhōngshān) in the office of the president (a title he had relinquished more than a week earlier) and persuaded him to agree to bring the question up in parliament again (though it must be noted, because he was no longer president, he lacked the formal standing to do so, nor was there much hope that his successor, the would-be emperor Yuán Shìkǎi 袁世凯, would raise it). When it was announced that the Nanjing parliament would disband and reassemble in Beijing — close to Yuan’s power base and farther from progressive constituencies — the road seemed closed.

It is in no way surprising that when the election law passed for the lower house of parliament, it permitted only male citizens (minimum age 21 with various property requirements) to vote.

There remained one more opening that might move China closer to full democracy. In August, Sun Yat-sen’s Revolutionary Alliance (同盟会 tóngménghuì) reorganized and combined with other groups to become a fully fledged political party, one that could better resist Yuan Shikai’s move toward autocracy. Not long after the vote denying women’s suffrage, an organizing congress convened to determine the new party’s platform.

The constituency of the new Kuomintang (KMT) was less progressive than the Revolutionary Alliance because of the coalitions and compromises that are part and parcel of electoral politics. When Tang Qunying and her allies helped introduce a resolution calling for the party to include “equal rights for men and women,” its platform was voted down overwhelmingly.

The more conservative platform may have helped the KMT win a strong electoral majority in the parliament in the elections for the first parliament, but they could not overcome Yuan Shikai’s antipathy toward democratic institutions. The KMT’s leader and presumptive Prime Minister, Sòng Jiàorén 宋敎仁, was assassinated at Yuan’s orders in March 1913. That November the Women’s Suffrage Alliance was disbanded. The movement for women’s suffrage, and by many measures the republic itself, came to an end, at least for the time being.

POSTSCRIPT: One of those working for women’s right to vote in China was Zhèng Yùxiù 郑毓秀, or Tcheng Soumay. Studying abroad in the 1910s, she was the only female delegate to the Paris Peace Conference in 1919, where she was part of a remarkable group of (mainly) women that fought for women’s suffrage around the world in a story detailed by Mona Siegel in her book Peace on Our Terms. But the victories won in the United States and United Kingdom did not extend to women: Chinese women would not get the right to vote until 1947, just two years before the advent of the People’s Republic ended meaningful elections in mainland China.