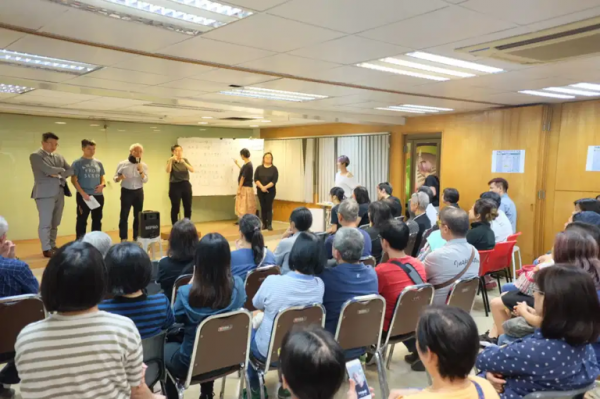 Two years ago, when Hong Kong became embroiled in a debate over an anti-extradition bill that spiraled into a massive protest movement, one population was left out of the discussion: the deaf community.

When public debate first broke out, Kimberly Wu, a 24-year-old sign-language interpreter, realized her deaf friends knew very little about the contested bill. Although the government claimed to have included all sectors of society on discussions surrounding the bill, such consultations did not include sign language interpretation. This was also the case for many events held by civil society, she said.

Since the community had to depend on lip-reading, written translations, and other means to keep up with the fast-paced news, many missed key updates and were excluded from the discussion. It was then that Wu decided to take matters into her own hands. With other interpreters, she organized a free workshop for the community, and invited legislators to discuss the bill.

From that workshop, a grassroots sign-language interpretation group was formed. Since then, they’ve continued to do front-line translations for various organizations and plan diverse events – all with the aim of making politics and human rights more accessible to the community.

“Before the first large-scale demonstration, most deaf people we knew didn’t know much about the amendment,” said Wu, who is now assistant project officer at SLCO Community Resources, an NGO promoting sign bilingualism, and is pursuing a master’s degree in human rights law. “Translation is a battlefield. We talk about connection and solidarity in the social movement, and I think it’s an important part.”

After the government promoted integrated education and began funding hearing aids – as well as cochlear implants – for those with difficulties, the number of schools for the deaf dropped from 13 in 1973 to just one today, HKFP reports. There were only 50 sign language translators before the launch of a sign linguistic studies program at the Chinese University of Hong Kong in 2018.

Yet advocates and community members say that sign language remains crucial to the community. Interpretation is vital for people to gain full access to information and public discourse in all spheres of life, from the educational system to the private and public sectors, said Cat H.-M. Fung, a freelance interpreter and member of the group.

“If you support oralism over sign language, you are building the speech monopoly,” Fung said. “You can’t magically make a pill or device and make a deaf person hear. You just turn yourself into an oppressor if you refuse the provision of sign language interpretation service to the deaf citizens.”

Inclusion remains a key issue. Most organizations, including the government, often prioritize hearing interpreters over those in the community. A spokesman from the Information Services Department told Hong Kong Free Press last year that the government hires interpreters of all hearing levels, and had no hearing ability requirements.

Hong Kong has a unique and full-fledged sign language that is independent from the local spoken language of Cantonese, according to Wu. The language developed and emerged from the community, and is an integral part of Hong Kong’s local culture. “It is used by a group of minorities who have always been a part of Hong Kong,” she said.

Danny, a 38-year-old office worker who is deaf, went to a deaf school that used oral education, with the aim of training students to develop their speaking abilities. Many struggled and fell far behind their hearing counterparts in mainstream schools, whom Danny noticed graduated with stronger foundations in almost all areas of education. In the past, teaching materials specifically designed for the community were also insufficient and lacked complexity, which caused students to grow bored and lack motivation for studying, he added.

“A lot of students used to spend all day with their eyes wide open, working extremely hard to watch the teacher’s mouth and straining their ears to make use of the remaining listening abilities they had to guess what the teacher was saying,” Danny said. “Sign language is the main language for the deaf community, so interpretation is an important channel for communication. Unfortunately, the government and the outside world have never prioritized our access to information. As a result, our educational progress and knowledge attainment lags far behind hearing people.”

Sign language is also particularly vital in situations where lip-reading is not possible. Such difficulties have only been exacerbated by the pandemic, which has made mask-wearing mandatory. In the early days of the outbreak, the group shipped over expensive masks from the United States with a transparent window in the middle – revealing the wearer’s mouth – to use during events so that community members could lip-read.

In September, a 20-year-old man who had hearing difficulties was arrested during a demonstration and charged with assaulting a police officer. During the trial, the man, who did not know sign language, wasn’t able to lip-read since members of the court were all wearing masks, and had to rely on listening through a headset. After he allegedly misspoke due to hearing difficulties, the judge accused him of “lying” and providing contradictory statements, Wu said.

“We need to know our rights and our choices so we can tell people we have this need, please accommodate,” Wu said, explaining that few deaf people were aware of their rights and had access to such information. “When he was still in the correction center, I wrote him letters and mobilized some deaf people to write letters.”

The protester is currently out on bail and is appealing the case.

For Danny, the sign language interpretation group represents a step in the direction of greater accessibility. He recently attended a seminar by the group on the rights of deaf and hard of hearing people after arrest, which he said taught him a lot of important legal information.

“I thought to myself: If I had known more about the Basic Law (Hong Kong’s mini-constitution) before, I would have been able to better protect myself and my rights!” Danny said. “I believe that this group will help broaden our horizons. I don’t want to continue being an ignorant frog at the bottom of the well — I want to learn as much as I can.”