How close, exactly, were Russia and China to nuclear war?

How close, exactly, were Russia and China to nuclear war? 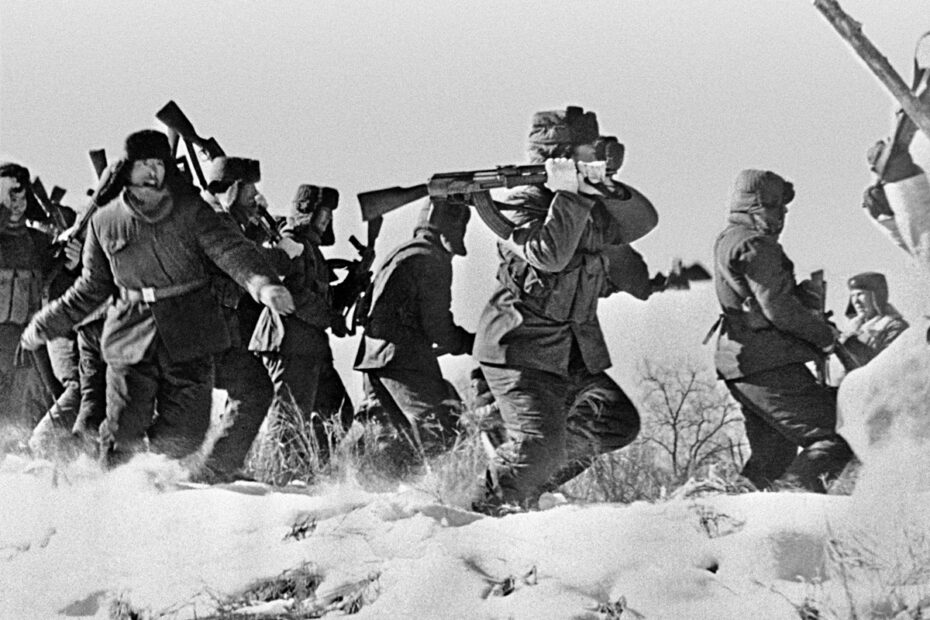 The two sides re-engaged two weeks later: on March 15, tanks, artillery, and many hundreds of troops did battle. Currently available sources make it impossible to know precisely what happened, but the best estimates are that the March battles led to more than 200 Soviet dead and wounded, and about half that number of Chinese.

Even allowing for the uncertainty in the details, the seriousness of what had happened cannot be overstated. Shots fired between two nuclear powers is always cause for alarm, even if there were no casualties. In this case, dozens (at least) were dead and hundreds wounded in a series of calculated engagements.

Analyzing the news at the time, the U.S. State Department concluded in its first report on the subject (now available as part of George Washington University’s National Security Archive) that the incident was “not likely to lead to wider fighting in the near future. However, similar incidents are to be expected from time to time.” This almost blase response seemed optimistic, even naive, in the months that followed. Moscow threatened a nuclear response. Dozens of Chinese cities constructed multi-level underground bomb shelters (repurposed in the 1980s as seedy shopping malls). Soviet threats to launch missiles against China’s own nuclear program, in Xinjiang, finally brought the PRC to the negotiating table. Not until September, when Zhōu Ēnlái 周恩来 and Soviet Premier Alexei Kosygin met at Beijing’s Capital Airport, did tensions ease.

We can see in hindsight that the border clash did not lead to war. The March battles were the last armed conflict between the Chinese and the Soviets on this part of the boundary, though some casualties were incurred further west, on the border with Kazakhstan. Still, two key questions remain: what caused the violence and what were its consequences.

Tensions between the Soviet Union and the People’s Republic had been growing for more than a decade, and in that sense the conflict was not a surprise. As to why the Chinese provoked — as they seemed to have — the bloodshed, it may have been down to the newly aggressive “Brezhnev Doctrine,” which claimed for the USSR the right to intervene against Communist Parties it deemed counter-revolutionary. The doctrine had sent Soviet tanks rolling into Prague a few months earlier, and some Chinese strategists feared that they might be next.

Also important to remember is that this was taking place in the midst of Mao’s Great Proletarian Cultural Revolution. Amid internal rivalry and conflict, a common external enemy that might provide cohesion was valuable to China’s leaders.

In terms of consequences, it is easy to say that they were few, because the conflict was resolved without full-scale war, but that is a superficial read. The secret Third Front Project, detailed for the first time in English in an important new book by Covell Meyskens, was an enormously costly endeavor, relocating Chinese heavy and military industries from coastal cities to a remote inland base. The Third Front was well underway by the time of the border clash, but the fighting only confirmed PRC fears of the Soviet Union and caused redoubled efforts to pour money into the project that, according to Meyskens, “dramatically altered the economic trajectory” of the PRC.

Another consequence of the clash was the door it opened for U.S.-China relations. As it became plausible to argue that the Soviets and not the Americans represented the greater threat, a reconfiguration of the Cold War became possible, one that in effect allied the U.S. and China against the Soviet Union. Three years later the American president was arriving in Beijing.

Sergey Radchenko opined on the 50th anniversary of the clash that it “changed history” by setting the PRC on a path toward rapprochement with the American, but the border fighting did not begin the process of China’s pivot away from the USSR and toward the USA. The split with Russia was a decade old, and Chinese strategists had already started considering how improved relations with the U.S. could give them leverage against the Soviets.

The incident ought not be seen as a calculated bid to bring the two sides of the Pacific closer together: historian Lorenz Luthi has argued that there is no evidence that the Chinese side planned the incident in order to advance its overtures toward the U.S. He also points out that planning — by both the Americans and the Chinese — to thaw relations between the two countries predated the Zhenbao Island fighting by several years. Nonetheless, the incident accelerated the process and made many in the Chinese leadership open to the possibility.

The talks between the Soviets and the Chinese that began in 1969 continued for some time, without resolution. Just before the Soviet Union dissolved, in 1991, most of the boundary issues were settled, including the transfer (or recognition) of Zhenbao Island to Chinese sovereignty. Remaining issues were settled — almost always with the cession of territory to China — in 2003 and 2008.

The Russian-Chinese border is no longer the world’s longest, as it was during Soviet times, nor are the two states the world’s largest Communist countries, but the shared interests of the two Asian giants remains a potent force, at least potentially. The events of 1969 are a reminder, however, that Chinese-Russian conflict has been much more the norm than the exception, even when the two states were ideologically and strategically aligned. The so-called “Longer Telegram,” anonymously published by the Atlantic Council, asserts that “China and Russia have now achieved a level of strategic condominium with each other in countering U.S. regional and global interests.” This seems to me overstated. Vladimir Putin and Xí Jìnpíng 习近平 seem concerned primarily with internal dominance and their own cults of personality rather than the building of grand alliances.